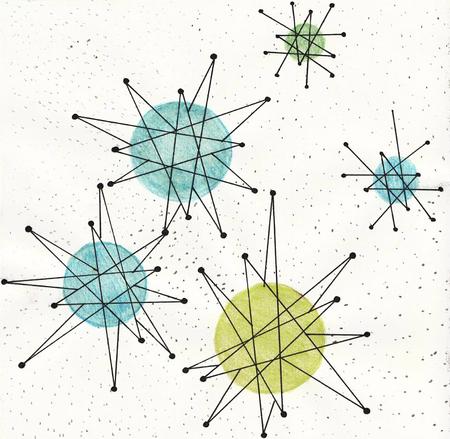 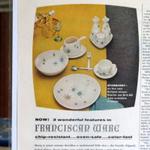 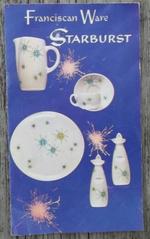 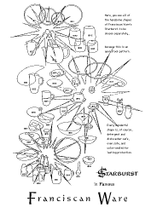 The Starburst pattern was designed by George James and was released in 1954. The post-war days had brought a measure of affluence to America and customers were eager for some novelty. The modern look and feel of the Franciscan Starburst was just what was needed to set off the elegance of the shiny new chrome kitchens and modern appliances.

The Starburst is a flat decal design. In contrast with the raised, hand-painted patterns of those days, the starry decal became an instant hit. The Starburst pattern was first printed on the Franciscan Eclipse dish. Two other Franciscan designs were introduced on the strangely-shaped Eclipse in the 1950s – Oasis and Duet.

According to Miller’s Collectibles, the Starburst pattern was in production during the years 1954 and 1957. However other sources claim that Starburst production continued up until the early 60s. Since the company shuttled between different owners at that time, the history of the company’s manufacturing and catalogues are quite vague.