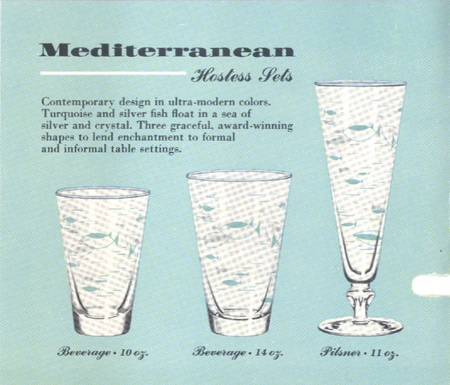 The Mediterranean pattern, also known as Atomic fish was introduced in 1955 and produced by Libbey. The new pattern was a part of the Continental glassware range and was exclusively targeted towards next generation Americans. The Mediterranean, is a modernistic motif consisting of turquoise and platinum-silver fish with lines flowing between them. To quote verbatim from a Libbey catalogue, "Contemporary design in ultra-modern colours. Turquoise and silver fish float in a sea of silver and crystal. Three graceful award-winning shapes to lend enhancement to formal and informal table settings."

The glasses usually have silver rims, but some have bright turquoise rings too. There are at least six or more shapes of glasses. Libbey has released a reissue of the Atomic Fish pattern and the glasses are still available on the market. They are, however, slightly different from the vintage Mediterranean pattern. The new glasses do not have coloured rims and the fish are black coloured instead of silver. The new reissue glasses are also made of a thicker quality of glass to allow for dishwasher use. The vintage glasses should not be used in a dishwasher for fear of chipping them or marring the design. All glasses are marked with ‘Libbey L’ at the bottom.