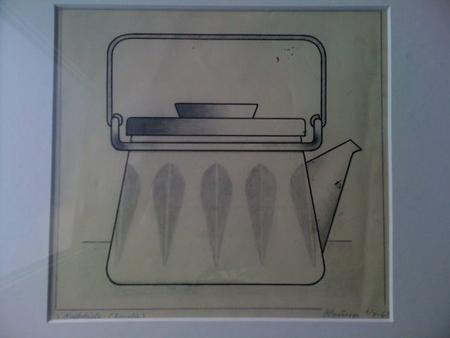 The Catherineholm of Norway Enamelware ran for 61 years during which it produced a number of unique designs with Grete Prytz Kittelsen being one of its most renowned designers who preferred the use of solid primary colors distinguished by bare metal for creating simple and modest designs. However, it was not Grete who designed the famous Lotus pattern even though she may have been responsible for the pieces that the lotus pattern emerges from.

It was Arne Clausen, a decorator at Catherineholm in the 1960s, who was behind the creation of the Lotus pattern which was tested out on some Norwegian housewives along with numerous other designs and the unbelievable positive response got for the lotus pattern led to its production and later it became Catherineholm's signature line. She created the design in 1963 but it was available for sale only from 1965. The company was started in 1907.

The Catherineholm line produced varied forms of pieces like bowls, plates, canisters, fondue sets, cookware pans that included skillets, double boilers, saute pans, baking pans etc. But the bigger containers meant for flour, sugar, coffee and the spice rack containers were prepared from aluminum and manufactured in Japan rather than the Norway Catherineholm factory. It is believed that the production of these containers in Japan was due to a contract given by CH to a Japanese company in order to cut down costs.

There are two kinds of salt and pepper shakers available with the lotus pattern but there is no confirmation that both these were produced by CH because one is nearly a lotus/bullet shape with the bottom having a small lotus pattern and the top having a slim triangle made of chrome and an exact replica except without the lotus at the bottom, was produced by another Norwegian company that CH may have probably given a contract to. The other type of shaker, produced in Japan, is identical to the spice container except for the holes on top. It could be concluded that the Norwegian shaker was produced first and then the Japanese company produced it along with the containers.

However, some Catherineholm lotus pieces bear the logo at the bottom while some do not and different pieces bear different logos, which is quite controversial. The pieces of the lotus pattern that were generally bright in colors became available in earthy shades in the 1970s, as that was the trend at that time. Typically the lotus pattern pieces are colors distinguished with a white. For example, a red lotus on a white background or vice versa. But again there is confusion since some pieces are available in colors, like a deep red lotus on a light red background.

The standard colors used in the lotus pattern pieces contrasting it with white are bright orange, green, bright yellow, wheat yellow, red, sky blue, navy blue, black, sage, pink and brown/rust. Apart from that, sky blue on light blue and green on pastel lime green is available. The pink color lotus pattern pieces are the most difficult to find, while the orange ones are the most trendy and common ones.

The bowls produced by Catherineholm are available in six different sizes, the biggest being 11 inches while the smallest being 3 inches, each fitting into the other, which is a real space saver and hence storing these containers easy. The size measurements of the six bowls are as follows (in inches):
3-7/8?, 5-1/2?, 7-1/8?, 7-7/8?, 9-1/2? and 11?