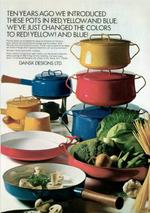 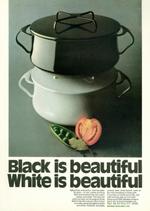 The Kobenstyle range of cookware was designed by Jens Quistgaard and manufactured by Dansk in the year 1955. The range consisted of enamel-coated steel cookware and was initially available in four colours – yellow, red, turquoise and lime green. The Kobenstyle line was distributed by Neiman-Marcus. Surprisingly, Neiman Marcus advertisements of the Kobenstyle cookware from late 1955 make no mention of Jens Quistgaard or the Dansk name, perhaps because both names had not become popular enough yet.

The lime-green colour was extremely short-lived and the Kobenstyle pattern continued in the colours yellow, turquoise and red for the next ten years. No design changes were made to the pattern at this time. The only change was the modified Dansk logo in 1959, which reflected the reorganized corporate identity of Dansk.

In the year 1965, the Kobenstyle pattern went through a series of changes. The design of the pans was improved and a new teak handle was introduced. New colours were added and the company began its production from Denmark to France. The Kobenstyle pattern was now available in the new colours of sun gold (a shade of yellow), blue and red.

The Kobenstyle pattern again revised itself in the year 1971, when Dansk introduced two more colours – black and white. However these colours ran only for two years and were later discontinued. Dansk continued to play with the colours available in the Kobenstyle pattern. They introduced a new orange shade called kumquat in 1973, which was in production until 1975. Green colour, which had previously been discontinued, was brought back between 1974 and 1976. Brown was made available between 1975 and 1983. The blue colour was also terminated in 1975 but revived again in 1977.

The Kobenstyle range was manufactured in a wide variety of factories across the world. Some Dansk labels have been found where the manufacturing location is printed as Japan or Indonesia. However not much data is available on the timeframes during which production was carried out at these locations. The Kobenstyle line has been reissued recently in the year 2012 and one can find vintage patterns in red, black and white at Crate and Barrel.