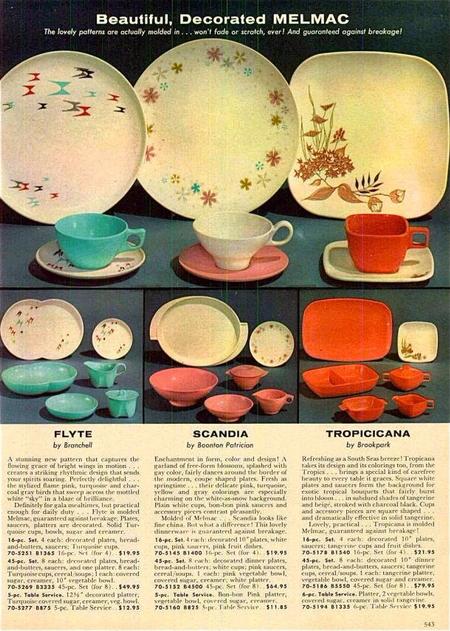 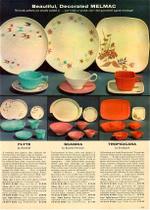 A truly amazing pieces of work that mesmerizingly portray the turquoise, charcoal grey and flame pink birds soaring across the speckled white sky, is the Flyte on ColorFlyte which is molded Melmac comprising of platters, cups, saucers, plates, bowls etc. that is guaranteed to be break-proof and is apt for daily use as well as special occasions.

Kaye LaMoyne was a freelance designer of the 1940s who was employed by the Branchell Company as well as many dinnerware manufacturing companies to give form to the then infant product called melamine. John Heduís success as a designer through his works in Belle Koganís Boonton Belle Line, the Lifetimeware for Watertown and the Boonton Molding Companyís Deluxe line, motivated many manufacturers to appoint their own designers who could mold this fresh, unbreakable material that would be a perfect substitute for the delicate china.

Initially, Ebonyte was introduced by LaMoyne which was a dinnerware that consisted of bamboo covers and handles that was inspired by the Chinese restaurant he used to visit as a student in Chicago and the products were inscribed with the phrase, Good Taste in Mandarin which was painted by hand. These hand-painted designs and signature can however come off through just normal handling. Even if Ebonyte might have been manufactured by another company, it was marketed by Mr. Belwich and Mr. Hellmich and the triumph of Ebonyte may have led them to launch the Branchell Company in 1952.

LaMoyne did face many difficulties like suffering burns to his eyes, during his experiments with melamine and urea formaldehyde. He was successful in fusing melamine with gold dust and foils and pink plastic with gold dust or foils was his much preferred choice. Along with his colorist background, these experiments helped him to achieve perfection in the speckled appearance of his Royal lines and Color-Flyte which was a rarity for many designers to achieve. Russel Wright pioneered the ìcloudedî look while he was working with the Northern Industrial Chemical Company, with his Residential line, Kenro Corporationís Ken Welch and Roger Sasia mastered a ìspeckledî design with their Holiday line and along with LaMoyneís Color- Flyte line, these lines were publicized in the early 1950s.

Color-Flyte was Branchell and LaMoyne's very first line of dinnerware that was marketed in groups and was available in glade green, glow copper, mist grey and spray lime which was a complete collection of bowls, tumblers, plates and serving pieces. The Color- Flyte line comprised of lug soup bowls and salad dishes whose handles were covered in raffia-like plastic by hand, which made it exclusive. LaMoyneís philosophy was that every piece of his work should feel good in the hands. Also, place settings in all colors were available, that could be mixed and matched, and it didnít matter which colors were put together because every color complimented the other beautifully. The cost of a starter set of 16 pieces was $15.95, a continuation set of 13 pieces was $16.95 and a complete set of 11 pieces was $18.95.

Flatware of the same superior quality was available in fresh colors and big salad bowls that had open handles and came along with smaller bowls that had one open handle, were made available in the Royale and Color-Flyte colors. The Royale line was launched in 1954 which formerly came in charcoal grey, flame pink, gardenia white and later in turquoise blue. The shapes of the dinnerware did not change throughout the Royale and Color-Flyte lines however, the sugar bowl and creamer that was included in the Royale line, was revamped. The cost of a starter set of 16 pieces was $15.95, a serving set of 5 pieces was $11.95, a service for six set of 35 pieces was $39.95 and a service for eight set of 45 pieces was $45.95. All these sets included a one year guarantee certificate that offered the replacement of any piece that got chipped, cracked or broken while using it normally at home and this became the major selling point. Melamine incorporated in matching colors in the handles of stainless steel flatware that was manufactured in Germany, once again became available separately.

LaMoyne designed numerous patterns which included Moonflower, Spring Lite and Flyte whose background color was gardenia white from the Royale line and clearly depicted the 50s style and were very reminiscent of the Atomic Age. All the four Royale colors could be paired with any patterned saucers ad they would without a doubt, complement each other. The Flyte pattern was used to produce glassware and other conventional patterns that were presented on a solid white background, included Rosedale, Tip Top, Golden Harvest, Lady Fair, Golden Grapes and Sweet Talk comprising of revamped bowls, cups and serving bowls.