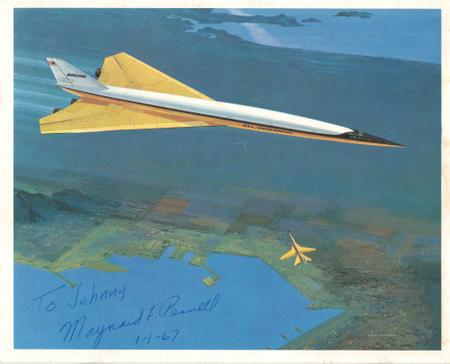 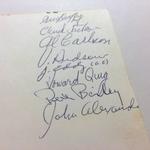 A part of history - this rendering of Boeing's 2707 SST supersonic jet, by Warren McCallister is signed by Maynard Pennell, director of Boeing's SST program in the 1960s. Signed to Johnny on January 1st, 1967, the day that Boeing won the American SST (Super Sonic Transport) contract from the FAA beating out Lockheed Martin's L-2000. This aircraft was America's answer to both Europe's (the UK & France) Concorde program as well as the Soviet's Tupolev Tu-144. The SST program was brought about by Kennedy's call for an American SST in 1963. The Boeing 2707 (internally model # 733) was going to be 50% faster at Mach 3 and almost double the passenger capacity of the Concorde.

It's initial design started with a complex swing wing plan that could vary it's geometry based on whether it was flying at super sonic speeds or not. In 1968 this ambitious design was abandoned in favor of an easier to manage delta wing design. The swing wing was very heavy and complex to build out for an aircraft the size of the proposed 2707.

Numerous engineers from Boeing signed the back as you can see along with an engineer from G.E. (General Electric), the likely manufacturer for the SST's jet engines. I can make out the following names:

along with Maynard Pennell's signature on the front. So far, I haven't been able to figure out ... who's Johnny? Anyone know? I'd love to figure it out.

Maynard Pennell was quite a force at Boeing. He was brought in in 1940 after a stint at Douglas Aircraft (pre-McDonnell Douglas) and was the assistant manager for the military B-29 program. He started hinting at and building support for encouraging a commercial aircraft program at Boeing and spearheaded the Boeing 707 design and later the 727. He also persuaded management to build out a family of different aircraft to serve different commercial needs. By the 60s, he was given directorship of Boeing's SST program before retiring in 1974.

Sadly, Boeing's SST program didn't survive and was cancelled in 1971 due to political pressure stemming from concerns regarding noise and environmental pollution. The Concorde finally flew commercially in 1976 and had a relatively safe track record until an unfortunate event in July 2000 when it was grounded for over a year. It flew again taking passengers crazily enough on September 11th, 2001 which as you know began a long slump for the airline industry. The Concorde was than finally retired in 2003, ending the world's only real commercial supersonic flight program.