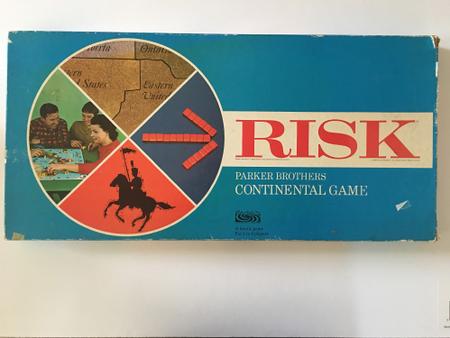 Risk, a strategy board game, has French origins as it was both invented by a French film director, Albert Lamorisse, and was first released in France as well. Back in 1957, it was known as La Conquête du Monde (translated as “The Conquest of the World” in English). The Parker Brothers (now a division of Hasbro) bought it later and it was thereafter produced by the former. Due to the rules constantly undergoing modifications, it was released twice in 1959, first as Risk: The Continental Game and later as Risk: The Game of Global Domination. A classic 1959 edition is also produced by Winning Moves.

Risk is a turn-based game for two to six players. It’s played on a board depicting a world map divided into forty-two territories, which are further segregated into six continents (excluding Antarctica). The objective is simple: capture every territory available while eliminating your opponents. Dice rolls determine the players’ moves as they each attempt to conquer territories through their own armies.