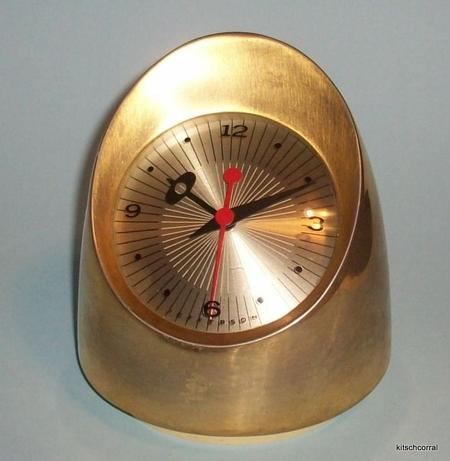 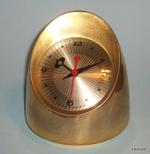 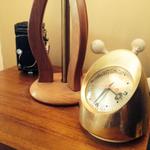 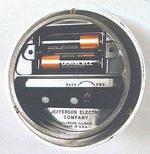 A Mid Century Modern design from the early 1960’s by the Dave Chapman organization and produced by Jefferson Electric Company of Bellwood, Illinois, the Jefferson Integer Cordless Electric Clock is quite similar to the 500 model. Although it derives its power from a battery, it is driven by a spring which unwinds while a set of contacts close following which, a solenoid acts to rewind the spring which further disconnects the contacts. This is a continuous cycle and after every 2 ½ minutes a “clunk” sound can be heard.

There are chrome and gold versions available both of which have the same registration number. The clock has a somewhat conical shape and the dial cover is domed plastic. The numerals 3, 6, 9 and 12 are in black and the other hours are depicted through black dots. The hour and minute hands are also in black but the second hand is red in color and the clock has 60 radial minute lines with a gold finish. The plastic base of the clock is raised about 7/16” higher than the mounting surface.

The clock is made of die cast zinc alloy which is also used to make the Golden Hour. However, its color and weight made people think that it was made of either steel or plated brass. The area surrounding the dial is either satin chrome plate or gold and the exterior is made from either polished chrome plate or gold along with the bottom for the chrome version being black and white for the gold version. The bottom is a satin surface with Cycolac: a high-impact plastic.