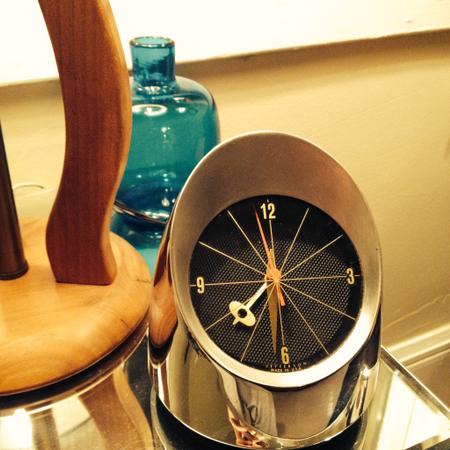 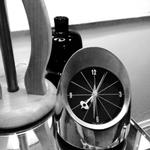 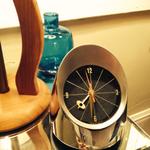 One of the most renowned clock designs that resulted from the collaborative effort of Mr. Dave Chapman’s organization and the clock engineering section of Jefferson, was the Jefferson 500 Clock produced in 1958. This clock stood out from the others because of its chic and unique design as it is inspired from the pattern of a ship’s compass.

The clock is made of die cast zinc alloy which is also used to make the Golden Hour. However, its color and weight made people think that it was made of either steel or plated brass. The area surrounding the dial is a satin chrome plate and the exterior is made from polished chrome plate along with the bottom being a satin black surface with Cycolac: a high-impact plastic.

The clock is 3 ½” in diameter and the numerals 3, 6, 9 and 12 are embedded in gold color on the back of a glass lens of single strength. The other hours are depicted through radial accent lines and an ornate black metal foil makes up the face of the dial. This can be found in true black or at in a faint purplish cast at particular angles. The hands are made of brass and have a lacquered, brushed satin finish while the second hand is polished with red enamel.

There is a lot of cord storage available at the base as the clock is raised about 7/16” higher than the mounting surface and the retractor “propeller” winds up any unemployed line cord in this space. An indentation at the back of the base provides an outlet for the cord so as to maintain the clock’s neat and chic look. The bottom of the clock also consists of a UL symbol and a knob to set the time and the cord and plug are made of black plastic. It has a sweep second hand and the usual clock movement.

The 500 has another adaptation in which the hands are fluorescent orange and the face is white. The second hand is the same as in the first version and the bottom plate bears Jefferson “500”. However, it is believed that this adaptation of the clock may not be genuine.