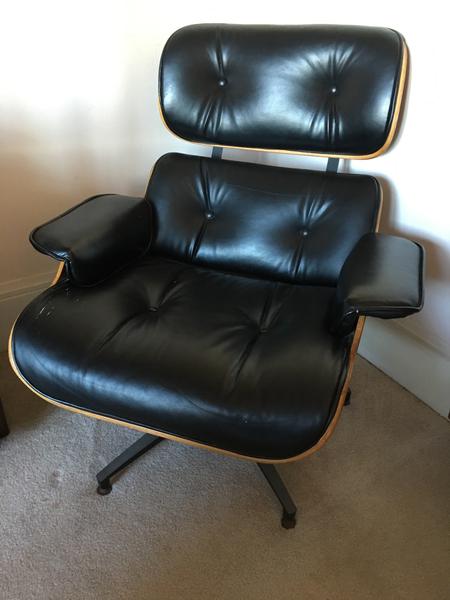 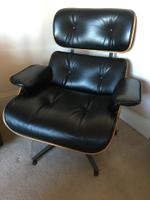 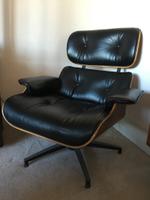 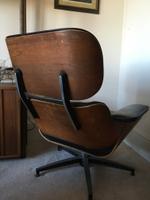 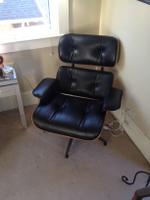 Charles and Ray Eames, were the designers of a popular range of lounge chairs, primarily designed for furniture manufacturer Herman Miller. A majority of their products, were mass-manufactured, however there was one luxury chair, envisioned as the quintessential English Club Chair which was handcrafted. Named the Eames Lounge Chair, the chair is synonymous with both comfort and modern design.

The chair makes extensive use of plywood and is formed out of three curved plywood casings, which make up the seat, backrest and the headrest. Early in 1956, when the chair was first introduced, the casings were made of five layers of plywood. The layers are shaped with the means of heat and pressure and are glued together. The plywood was covered up with a veneer of Brazilian rosewood. Since the 1990s, the Brazilian rosewood veneer has been replaced by walnut, cherry and sustainable Palisander rosewood. The casings are still constituted of seven plywood layers.

Charles based the design of the Lounge chair on a comfortable, well-worn baseball mitt. He wanted to bring in the “warm, receptive” look of the mitt into the chair. Ray was initially unimpressed by the chair and observed that the chair seemed “comfortable and un-designy”. Despite this reaction, the Eames Lounge Chair turned out to be a popular product. Its first TV appearance was on the Arlene Francis Homeshow on NBC. The show aired in 1956 in the United States. Soon after its television stint, Herman Miller released an advertising campaign. It was a print ad, showing an old grandmother, sitting on the porch of a Gothic-styled American home, in the midst of a sunny field. The chair has also appeared in the sitcom Frasier and is placed in Frasier’s apartment. An imitation version has been made use of in the show House, and in Malory Archer’s office in the show Archer.

New models of the chair had additional rubber paddings between the aluminium backbone and wood layers. Hard plastic washers were used in some later models instead of the rubber padding. The older and newer models are also different in terms of the number of screws used to attach the armrests, old models use three screws, while newer models use two. The styles of screws used also are substantially different. The older models had either a black or brown zipper for the cushions, while later models only have a black zipper. The backrest and headrest are similar in proportion. The ottomans of the earlier models had a rubber slide, with metal glides on the feet.

The Eames range was especially well known for the use of new materials and constant reinventing. The Eames Lounge Chair Wood ( LCW) made use of a new ‘shock mount’ technology, consisting of a heavy rubber padding fixed to the backrest and the lumbar support. This allowed the backrest to flex, making the chair more comfortable. The same technology was used in the 670 Lounge Chair as well. In this chair, the back and head support are connected together using screwed aluminium supports. The armrests are equipped with shock mounts which are glued to the backrest. Thus both the backrest and headrest are capable of flexing. This technology turned out to be their Unique Selling point as well as their drawback. The shock mounts were prone to tearing apart and causing the entire chair to collapse.

The Eames lounger were also famous for their unusual use of materials. Unlike the standard nailed or stapled cushion covers that were in vogue at the time, the Eames cushions were sewed using a zipper around a plastic backing. The backing was further connected via hidden clips to the plywood casing of the chair. Due to this unique design, the outer veneer looked blemish-free and without any visible screws. Due to its popularity, the chair has continued to be manufactured ever since it was first launched.

Herman Miller is the company that produces it for the American market, while Vitra began manufacturing it for the European market. It was being manufactured by Hille for a short duration, however they were not allowed to continue due to quality issues. Although a number of companies produced copies of the original Eames chair, only Vitra and Herman Miller have been licenced producers of the original Eames chair till date. The year 2006 was the 50th anniversary of the Eames chair. A special Palisander rosewood veneered model was released on the occasion.