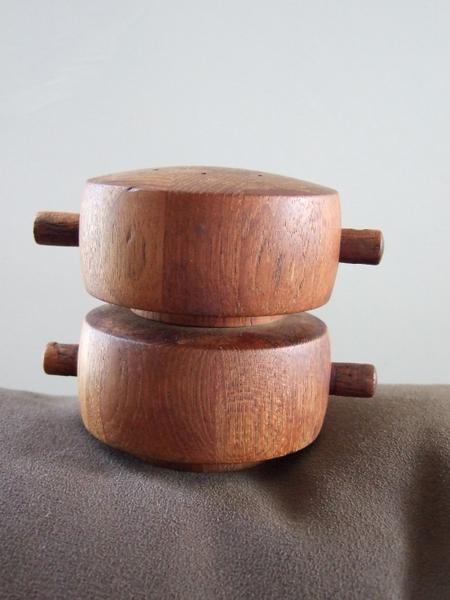 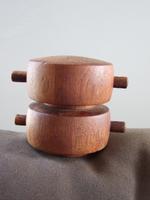 Style 824 was regularly produced by Dansk in several manufacturing locations, and is also amongst one of their most common mills. Several variations were produced. Such as the earliest edition consisted of a Peugeot grinder and 7 salt holes set in a circle (but no center hole). These edges became rounded when the Peugeot grinder was phased out. Other variations include the later versions produced in Thailand and Malaysia. The changes included a solid piece of teak being used, replacing the old staved design, and also the 6 salt holes being moved much closer to the center.

This certain product has been produced by Dansk Designs, its designer Jens Harald Quistgaard (abbreviated to JHQ). Two short cylinders are available, a salt shaker and a pepper grinder. Both of their dimensions are 3.8 x 4.7 x 3.4 in respectively. They come with the Peugeot and Tre Spade mechanism and are composed of retro plastic, plastic, Thai metal, staved teak, and teak.

Dansk summoned these exotic woods from the rainforests of the world to Jens Quistgaard's Danish studio. They make up this delegation of uncommon salt-and-peppers. Quistgaard designed each piece as a complete table seasoner. The top holds salt. The lower half grinds up fresh peppercorns. Clever? Yes. But there's more to it than that.

The shapes here, as in Dansk's entire Top of the Table Collection, are sculptures in their own right. Designer Quistgaard selects his rare woods with an expert eye. Then he carves dozens of models, before deciding on the few to be reproduced. Each must come up to the very special Dansk standard. Each must be fresh. Dignified. Audacious. Timeless. Satisfying to behold. And all this beauty must work. How?

Effortlessly. As do our pepper mill mechanisms. They're as extraordinary as the shapes. They're made in France especially for Dansk. The steel is so hard, and machined so accurately it can crack the toughest peppercorn to a gourmet's taste. Each mill is pre-set to a medium grind because that's how pepper tastes best. No re-adjustments, no chunks -- just a smooth, even sprinkling of pungent grains. Such knowing places as Laperouse in Paris and La Cremaillre in Banksville, New York use them. So treat yourself and your table to one of these unique seasoners. Soon you'll find you're giving them to your favorite people. They'll think you're the salt of the earth.