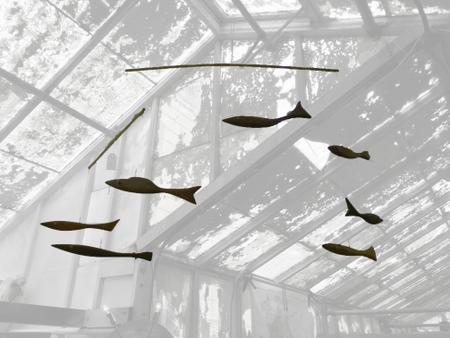 It's hard to capture this beautiful sculpture on film, so I blurred out the background to better see the mobile 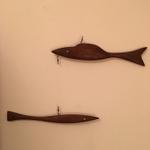 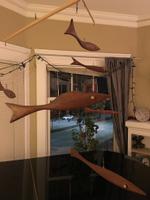 Fish #1: The largest fish hangs by itself, and it's huge almost whale like tail curves upward to the right. The fork in the caudal fin is soft and subtle, more lunate than fork.

Fish #2: The longest fish (with 2 smaller ones #3 & #4 hanging below) is long and fat with a sharp forked V tail (acute angle between). There is a small chip out of the bottom of the tail.

Fish #3: A tiny fat fish, with the biggest "belly" of them all, looks like a fat minnow. Has a upward sloping tail again with a sharp V tail. The V tail's opening is just a skosh obtuse. Hangs from fish #2.

Fish #4: A very long and narrow, but adult fish with a truncated caudal fin (tail). Hangs from fish #2.

Fish #5 - #7, hang off a secondary wooden bar/dowel, while the other fish hang directly from the main bar or from each other.

Fish #5: The humpback fish (looks like a male pink salmon due to it's hump). Again, sharp V tail with an obtuse angle between the forks.

Fish #6: Long streamlined fish with a heterocercal caudal fin, small chip at the top of the fin.

We hung it above our piano in the living room. What I love is that even without the slightess breeze, the mobile is always in motion, albeit slow, but it brings a dynamicness to the room that we didn't have before.