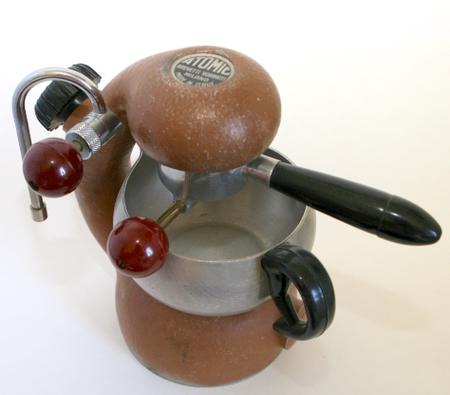 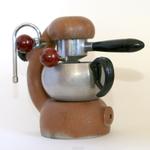 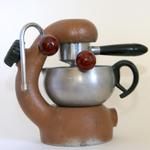 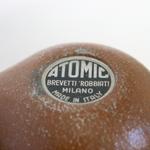 The “Atomic coffee-maker” brand is not only limited to coffee machines, but has produced a wide variety of kitchen appliances. Notable among these are the electric and the stovetop coffee-makers. The ‘pressure-pot’ stovetop models are widely known and are the ones that come to mind when one hears of the Atomic label.

The early models of the Atomic coffee-makers operated at a pressure of 1.5 bar, which is much less than the modern day coffee-makers operating at 15 bar. However the espresso machines of the olden days worked on much lower pressures and are comparable to the Atomic machines. The kettle’s purpose is twofold – it functions as a warming tray for the jug and the metal content in its head lowers the water temperature to the required temperature of 92 degrees Celsius. The coffee turns out much less bitter than modern-day coffee machines owing to the low pressure. The coffee also doesn’t get burnt, adding to the sweetness. The classic Atomic model has very few moving parts and is completely mechanical. This has given it an extremely long-life even with less maintenance. To add to its charm, the pure graceful design almost gives it the look of a sculpture.

The stovetop Atomic espresso machine is a great favourite amongst collectors and has almost amassed a fan following. Atomic machines have been manufactured majorly in Italy and have the Giordano Robiatti Milan badge, however some machines have also been produced by A&MG Sassoon, UK and Stella in Vienna. Atomic machines manufactured by Qualital have also been in circulation, however there is some doubt about their authenticity. They are incredibly rare, and continue to be collectibles.

Machines manufactured between 1950 and 1980 are the modern-style machines with a rounded shape. Many different models were produced and launched during this time and all exhibit minor changes. There are differences in size, in the design of the knobs, thickness of the body, the position of the steam valve etc. The original machines were made of shiny aluminium alloy, while some of the newer machines came in different enamel colours like brown and orange. The filler knobs also have different colours. Most are black or red; green Bakelite is uncommon, as is the light blue steam knob found on some Sassoon machines.

Another important change came about due to the fact that various sellers changed the badges on the machines. The design however, remained unchanged. Badges are commonly seen on machines from Qualital (Hungary), Stella (Austria), Robbiati (Italy), La Sorrentina, Thomas Cara, A&MG Sassoon(UK), and Bon Trading(Australia). Apart from these there are quite a few uncommon badges like Aetna, Life-Ware, Stemac, Hogar, Cuba, Little, A. Gorrea, Culinor and E.Ewd. A few design changes have also been introduced over the years. A steam wand (also called a frother) was introduced in order to make cappuccino, and a brass rod was added. In the earlier models, especially the Sassoon, the wands were positioned at the top of the machine. This position did not turn out to be user-friendly. Later machines had the wand placed much below.

Many a times, old mechanical parts of the atomic machines are replaced with similar modern parts. These can be easily recognised through small differences in the make of the object. As an example, new-age filter baskets have concentric holes, while original Atomic ones have a star-shaped hole pattern. While purchasing a vintage Atomic machine, a few considerations need to be kept in mind. The value of the piece depends to a large extent on its quality. A well-maintained machine, with all parts available will fetch a higher premium. Some parts that must be checked are the body, grind holder, jug, filter, head filter, filler knob, screws, wand, and steam rod.

The badge is also an important item; the value of the machine may differ based on the quality of the badge and the company it belongs to. The green and blue Bakelite knobs are rarer and more valuable than the red coloured ones. Other important items are the packaging, instructions, the frother wand etc. There are also a number of common flaws to keep an eye out for. Most important are worn-out badges. A serious collector will pay much less for a shabby badge. Other items often broken or missing are screws, damaged seals, frozen knobs, spoilt pressure valve etc.

A frozen filler knob however, can easily be replaced or repaired. This can help increase the price of an item. In the enamel-finish models, there may be a number of chips in the veneer. These cannot be repaired easily and thus the price could drop by almost 15%. Good quality enamel machines are also about 5% less expensive than an aluminium machine. If the head filter is missing, the price could drop upto 15% because it is not an easily replaceable item. There are some models sold by Cara, which have a pressure gauge. These valves turned out to be a disappointment as they are not very useful. Also they lessen the aesthetic appeal of the model. Some missing parts can be easily obtained and do not decrease the value of the machine by much. Some of them are knobs, seals and filter baskets.

However parts like jug and grinds holder are quite irreplaceable. There have been instances where fake Atomics have been found in the market. Most of these were of the ‘Bou Trading’ badge, but not all ‘Bou Trading’ machines are rip-offs. Fake machines can be recognised by ill-quality finishing, steel steam valve replacing the brass, protruding casting plug, moulding marks on grind holder and marks on the jug.

The La Sorrentina, is a modern-day replica of the original Atomic machine. It was produced and launched in 2007. The configuration is the same as the vintage coffee machine and the price range is comparable too. Another reproduction of the original arrived in the market in 2009, called the Otto Espresso. These machines are not fakes, but good quality machines which make good coffee. An Australian company Bon Trading also began remarketing contemporary Atomic machines in the year 2008. The models can be identified by the “Made in Italy” marking on the kettle’s base.