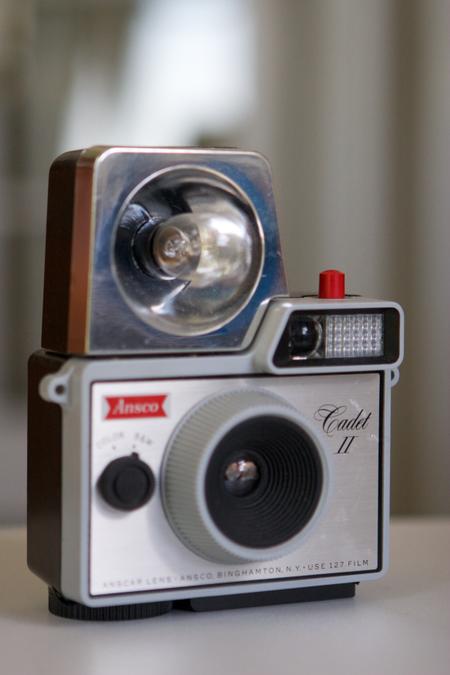 The camera that Mom & Dad made into a nightlight ... look, it's so cute! 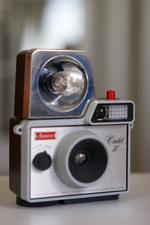 The Ansco Cadet II, introduced in the mid-1960s by the Ansco Camera Company of Binghampton, New York, was a step up from its predecessor (the Cadet of 1959).

Its inventor, Ansco, had been a photographic supplier since the 1840s and soon branched out in producing his own cameras by 1870. The company’s name later changed to General Aniline and Film (abbreviated to GAF) in 1967 but was eventually sold out to Haking of Hong Kong in 1978. Despite that, Ansco-branded cameras were made well until the 1990s.

The Ansco Cadet II comes equipped with a variety of appealing features. Its body, though made of plastic, has an aluminum faceplate. For convenience, a strap can also be attached via the two mounting holes available. The choice of film (black or color) isn’t limited to only one. A dial at the front controls the size of the aperture, the larger opening for color and smaller for black. Either one can be selected through this. Unlike the Cadet, the Cadet II also utilizes 127 roll film. It is capable of producing 12 square images and is wound by a large, round wheel at the bottom of the camera. An optional flash attachment may also be used with the camera and is mounted on top. However, its use requires an additional 2 AA batteries.