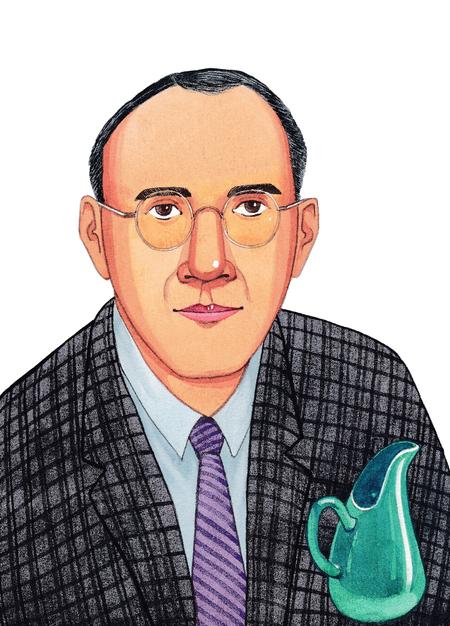 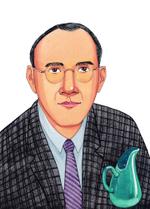 Russel Wright, born on 3rd April 1904, has largely contributed in introducing modern design to standard families and was a renowned industrial designer from the 1920s to the 1960s. During this period, his designs ranged from items such as vases to home decor and from tableware and serve ware to furniture which were produced from silver, glass, pewter, ceramic, melamine, wood and spun aluminum. A range of textiles was also designed by him. Russel and his wife Mary Small Einstein, who was a designer and sculptor, came out with Wright Accessories which consisted of unique designs of home accessories including cast metal animals.

In 1939, Steubenville Pottery, situated outside Ohio, that produced American Modern sugar bowl in seafoam green, launched American Modern- a line of ceramic dinnerware by Wright, which is regarded as the most extensively sold dinnerware in history. Its production lasted till 1959.

The American Modern had a range of unique colors such as seafoam blue, chartreuse, grey, bean brown, white, coral, black chutney, glacier blue, cantaloupe and cedar green. Although being very delicate because of being produced from earthenware, the dinnerware was a huge success because of its absolute modern designs that did not include any kind of decorations. Iroquois created a future line of high-fired china called Casual. The American Modern line in its original colors, was once again brought into the market by Bauer Pottery in 2009.

In 1953, Russell won the Museum of Modern Art Good Design Award for his Melamine work- Melmac. It was in the same year that his Residential line was established which was exclusive in colors, weight, shapes and resilience which motivated the clients to use the plastic in their homes. Wright significantly promoted the use of melamine for commercial purposes but lost the legal battles that went on for years, as a result of which, a manufacturer stripped off his name from the molds.

In 1959, Northern produced the line of lucid melamine called Flair that was more chic as well as heavy, created by Wright. But a year later, Northern began facing financial problems which resulted in the short-term life of Flair.

Wright and his wife published their book called Mary and Russel Wright's Guide to Easier Living in 1950 which enlightened readers on ways to decrease housework and increase leisure time by optimum usage of resourceful means. This book was reprinted in 2003 and provided great insights to their future projections.

After the demise of Mary Wright, Russel retreated to Manitoga, his 75-acre estate in Garrison, New York where he built a studio called Dragon Rock which is on the Register of Historic Places and is nominated as a Natural Historic Landmark. Wright died on 21st December 1976 after which his daughter took over and looks after all the operations till date.

Throughout his life, Wright's objective was to make living easy and casual and since he believed that the center of the home was the dinner table, he focused on producing items like the American Modern Celery Tray that was 13 in length, 3.25 in breadth and in depth, that matched larger furniture and catered to family get-togethers.

Despite the availability of melamine tableware in department stores today, people who desire the real 50s experience of superior quality, definitely value the re-issue of the Residential line that includes cups and saucers, tumblers, platters, covered and divided vegetable bowls and soup bowls in a variety of colors like lemon and aqua.