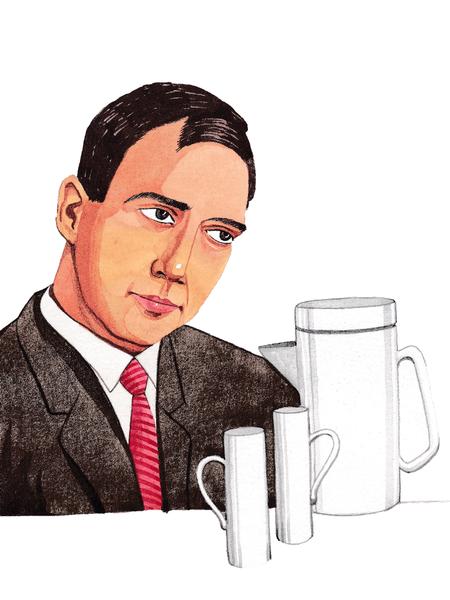 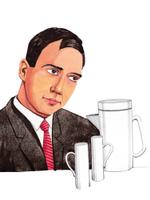 Pottery artisan and designer LaGardo Tackett was born in 1911 in Henderson Kentucky. He was generally known as Tack, which he preferred to his rather strange first name. He relates an anecdote about how he came to be named LaGardo. His father who was a grocer, gave him his name after a can of tomatoes at his store!

He studied geology for two years at Indiana University, but soon dropped out of school. He met Virginia Lee Roth at Indiana and married her immediately after. The couple moved to New York in 1937 and Tackett began working at the May Company, which was a popular department store chain. They again shifted base to Los Angeles – the company headquarters, when Tackett was made the interior promotion director at May Company.

He turned soldier during the second world war and returned home in 1945. With the GI Bill money, he was able to enrol into a pottery class. He developed his pottery skills further and went on to teach at the California School of Art. He also taught a course at his own kiln in Pasadena. His work came into the limelight after being noticed by Max and Rita Lawrence, an entrepreneur couple . Along with Tackett, other artists like Malcolm Leland, David Cressey and Tackett’s students John Follis and Rex Goode were also spotted by the Lawrences. Max and Rita established a company called Architectural Pottery, which became the favourite store for architects looking for pieces for their Case study houses. Architectural Pottery products can still be purchased from Vessel USA.

LaGardo Tackett along with his wife Virginia, was the founder of Tackett Associates, a large-scale pottery manufacturing company. The company came into being in 1953. Kenji Fujita joined the company at its inception and remained with the company for a short time.

Owing to his close friendship with Paul Schmid ,Tackett went to Japan in 1956 and stayed almost a year and a half with his family. Paul was a part of the porcelain manufacturing company Schmid International. It was there that he designed the ‘Forma’ range of dinnerware for Schmid International. He also shifted gears and moved from pottery production to pottery design. Tackett then went on to create his ‘autonomous’ line which was heavily inspired by anthropological research of the history of tableware. The ‘autonomous’ range could be used at the table or even around the house as standalone accessory pieces. During his time in Japan, he also designed some pieces for the Freeman Lederman Company.

Tackett returned to the US and established a new design studio. The family again moved to Tokyo in 1960 and returned to set up base at Connecticut. Tackett continued to have a working relationship with Schmid International and often travelled to Boston, where the company was headquartered.

When in Japan, LaGardo Tackett also worked alongside European ceramic artists at Japan’s largest Ironstone factory. It was there that he produced some of his best stoneware. The stoneware is representative of his trademark simplicity, sensibility and minimalism, which he also displays in the Architectural Pottery range.

One of his early dinnerware designs is a chocolate-coloured range called Rockingham paired with fish motif plates. He soon made the transition from terracotta to porcelain. Some of his popular designs include globe and cylindrical canisters marked with a peculiar toggle handle; Bird- shaped Sandpiper cruets and decanters for espresso, coffee and liquor . For Freeman-Lederman, his signature style consisted of glazed spirit bottles of white, embellished with bright red script and a large dot. Another popular product was the Black Russian anthropomorphic decanter, which Tackett designed to promote Kahlua. He is also credited with the design of his goofy egghead containers. The containers were sold on the backs of Playboy and Esquire and were used as bedside boxes to keep condoms! Tackett’s health went downhill in 1970, when he suffered from a stroke. He died in the year 1992.