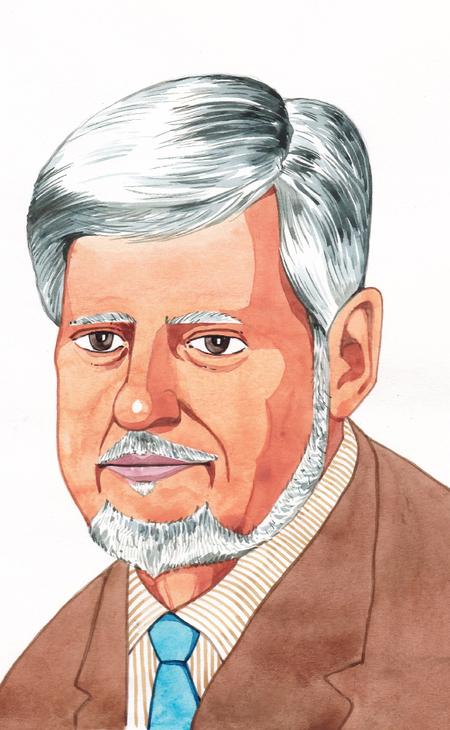 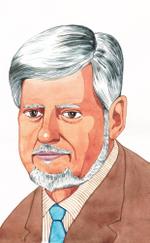 Jens Harald Quistgaard was born on April 23 , 1919 in Copenhagen, Denmark. Having been born and raised in an artistic household, he began to show his creative bent early in life. His first workshop was in his mother’s kitchen, where he used a vice and anvil to create handicrafts. He began to create various items like hunting knives, bags, jewellery and ceramics. As a youngster he took himself to the local smithy and carpentry where he learnt the tricks of trade. Later in life, he applied these principles while producing wood, glass, metal and ceramic artefacts.

His father, Harald Quistgaard trained him in the art of sculpture. Jens later joined the Copenhagen technical school where he learnt to be a silversmith and drawer. He began his work career as a portrait artist. He began making reliefs as well as glass and ceramic work, hunting knives and jewellery . Jens also specialised in making graphic designs for coats-of-arms and monograms. In the late 1940s he began making cutlery and silverware. He has produced cutlery for a number of different companies. He created steel kitchen utensils for Raadvad, a shark-fin can opener, and a set of silver cutlery named Champagne for O.V Mogenson. His pioneering design of a cutlery set – Fjord- of stainless steel with teak handles earned him industry recognition.

He went on to create a cast-iron saucepan, under the Anker-Line range, for De Forenede Jernstoeberier of the United Iron Foundries. This design brought him the gold medal in 1954, at the Triennale in Milan. Quistgaard was also awarded the Lunning prize in that year. At around the same time, Jens caught the attention of Ted Nierenberg, an American businessman , who was scouting for talent in Europe. Nierenberg visited the Copenhagen’s Danish museum of Art and Design where he saw the Fjord cutlery set. Impressed with the design, he met Jens Quistgaard and established the Daansk Design Company. Quistgaard was appointed Chief Designer.

Quistgaard became a huge hit in America and his designs were extremely popular. The Fjord design was brought to New York in 1954 and soon the vibrant Kobenstyle saucepan range was introduced. The Dansk company also brought in a gamut of new cookware and tableware like silver and steel cutlery; steel, copper and cast iron jugs and saucepans; stoneware and glassware. They also introduced articles like bowls, trays, candlesticks, peppermills and exotic teak and staved wood artefacts.

Quistgaard’s range of products was built in harmony with utility and aesthetic. Kitchen utility items were created to complement and work in coordination with the tableware. His products boasted of superior natural materials, clean lines, and forms and became synonymous with stylish living. He was a prolific artist and produced more than 4000 designs for Dansk. His most fruitful years at Dansk were between the 1950s and the early ‘60s.

Quistgaard designed a number of exemplary pieces such as the steel and bamboo cutlery set Toke and the stone dinnerware Flamestone, in 1958; the sterling silver cutlery Tjorn, in 1959; the colourful lacquer bowl range Festival, in 1960; and the unusual wooden design Rare Woods, in 1961. The industrial woodwork range was manufactured by Nissens Woodworking factory, Denmark. Quistgaard designed a few more products for the Denmark factory such as the Stick chair in 1966.

Ted Nierenberg, Quistgaard’s American partner, asked Quistgaard to design a villa for him at Armonk, New York. Accordingly, in 1950, Quistgaard designed each element of the villa, including the window and roof constructions, the bath-tubs, doorknobs, and the spiral staircase. He also supervised the construction of the villa. The villa, which was ready in 1961, was a model of architectural unity as envisioned by Quistgaard.

Quistgaard’s popularity and renown increased during the 1960s. Outlets of Dansk Design opened up in prime cities like Copenhagen, London and Stockholm. Quistgaard’s work became known not just in the US but also in Japan and Europe. His designs were showcased in Berlin, Zurich, Tokyo, Paris, Melbourne, Johannesburg and many other cities over the world. In the 1980s, Quistgaard moved to Rome. In 1993, he relocated to Denmark where he continued designing products.

A documentary film titled ‘A Saucepan for my Wife’ and based on Quistgaard’s life and experiences as a designer, was made in 2009. He also was the recipient of an honorary grant from the Danish National Banks Anniversary Fund of 1968. He was awarded the Neiman Marcus Award in 1958. Quistgaard died in 2008, at the age of 88 in Denmark and was buried in the Gimlinge Cemetary. He is outlived by his son, daughter and grandchildren.