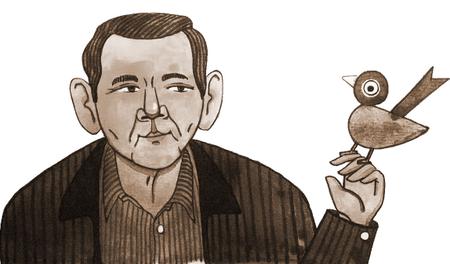 A 24 year old Gunnar Florning, whose hobby was to cut out shapes in wood, and sometimes in buffalo horn, was approached by Illums Bolighus with the offer of purchasing all the cranes that he would produce in buffalo horn. Florning quit his job and rented a few rooms in Svanevej, Copenhagen NV district. He created his first workshop here, and made about 25 cranes in a week. A year or so later, he also began making lions and other animal figures. The items sold so well that he hired his first 5 or 6 employees.

A merchant named Laurids Lonborg, impressed with Florning’s creations, offered to purchase all that he produced, turning Florning’s hobby into a big business of handicrafts and gift items designed and manufactured in wood, leather, wicker, acrylic, and other materials. With the increase in demand came the requirements of larger premises and more employees. About 35 employees were hired, and the production was moved to the old Dana Light factory in Blegdamsvej 114a, Copenhagen. One floor in the factory was devoted to woodworking; another was fitted for painting and assembly. A third was used for curve acrylic leather and skin processing. The factory also had a warehouse in the attic.

Florning’s work in the factory had to come to an end in 1965, when it was discovered that he had become allergic to almost all types of wood dust. He remembers all the employees in the factory with gratitude for their services and for helping him through this particularly difficult time. Motivated by their positive attitude, Florning studied to become a realtor, started a business as an independent realtor. After working for 17 years as an independent contractor, he was offered a job in the Kreditforeningen Denmark (KD) as an evaluation inspector. The IT solutions that he drew up as an evaluation inspector, earned him the position of the head of IT department of KD. KD began acquiring real estate to establish the real estate agency ‘HOME’, and Florning was appointed the technical manager of KD’s 137 stores. He retired at the age of 64, and lived in Slangerup with his wife Inge, and daughters Anette and Randi.

Florning grew up in Bispebjerg in the 1930s and 1940s in a very large, happy family and a spacious house. He had a curious mind, and was empathetic by nature. His ability to listen to people and advise them whenever necessary, combined with his innate empathy made most people like him and enjoy his company.

Florning met Inge in Prater in 1951, and it was love at first sight for both of them, and they moved into a small guest house. They had two daughters, after which Florning got busy with his hobby of cutting shapes in wood. With Illums Bolighus contacting Florning, offering to purchase his creations, the factory was started where the now famous characters began to be made. Having had to quit his beloved work of creating wooden characters, Florning studied to become a realtor and opened a new business, starting a completely new career.

Florning was very much in tune with technology. He created his own website, which is frequently visited to this day. He got his first computer at the age of 45, and was quick in understanding the process of making programs. This ability of his took him to the position of technical manager of Kreditforeningen, where he helped start up the HOME chain, and bring together all the broker stores in one large residential database.

After 59 years together, Gunnar Florning’s wife Inge passed away in 2010. Her death was a big blow to Florning, who felt her loss intensely. He then met Lis through their common interest in music, and found love once again at the age of 79. Florning and Lis spent four years together until he passed away from his lengthy illness. Gunnar Florning was a man who loved life, and lived it to the fullest even in his old age. Always grateful for everything good that happened to him, he was known to say that it was dangerous to live, because one ran the risk of dying from it.

From 1955 to 1965 Gunnar Flørning was the man behind many of the biggest Danish design successes that were produced for the Danish company Laurids Lønborg.

Of his many wood carvings he is probably best known for the world famous cat which was produced from 1958 and sold more than 300.000 pieces in Europe, North America and Japan where his designs were hugely successful.

These fabulous Siamese cats are available in either black or natural wood, and they look just perfect displayed as a pair. Gunnar Flørning’s iconic cats have been resurrected in all their Danish mid-century glory.

Gunnar was sadly forced to retire from his workshops as he became severely allergic to all types of wood dust. A collaboration with a young Danish company called Lucie Kaas gives Gunnar’s charming animals the chance to be collected and loved as many generation have done before.

Gunnar Flørning first created this charming little oak elephant back in 1961 in collaboration with Harry Vedøe who is widely known for his illustrations in children books by Danish author Benny Andersen. Now back in production this classic mid-century design is back for all to enjoy.