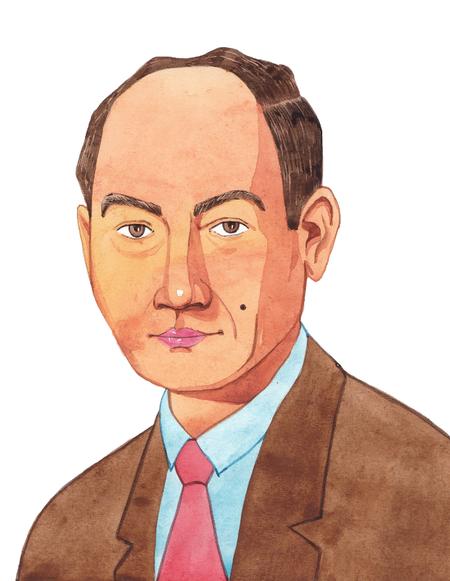 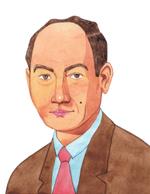 George Nelson reigned over the Mid-Century Modern design and architecture stage since its early years. He is regarded as one of the most important and authoritative designers of the twentieth century. Although he was not a ‘traditional’ or conventional designer, many of his designs attained an iconic status. He and his team invented some of the most popular Mid-century modern furniture and home appliances, like Storagewall, the multimedia presentation, the open plan office system or the Bubble lamp, the Ball clock, the Marshmallow sofa and the Coconut Chair. He was an architect, urban designer, interior designer, and graphic designer who was more interested in writing about architecture and traveling, than in the construction business.

George Nelson was born in a highly educated family in 1908. Traveling, and not money-making was what interested him most. He said, “There was none around who said ‘Go out and get rich’, so I followed their instructions and never did Nelson had no idea what he wanted to study when he joined the Yale University in 1924. A storm made him duck into the architecture department of Yale, one day. There, he saw a presentation of tempera and watercolor renderings called ‘A Cemetary Gateway’. The drawings impressed and stirred him so much that he made up his mind to become an architect. He said, “They were the most exquisitely beautiful and exciting things I had ever seen in my life. I fell in love instantly with the whole business of creating designs for cemetery gateways. This was when, without any further question on my part, I decided I had to be an architect. He graduated from Yale in 1928 and was engaged as a Teacher’s Assistant in 1929. It was the first year of the Great Depression. All construction work in the country was suspended, and architects were jobless. In this time, he won the ‘Rome Prize’ - a prize that gave him the opportunity to study at the American Academy of Rome for two years. All expenses were covered, and accommodation provided - a fortunate event at a time when people were struggling for work. In the years that followed, Nelson traveled extensively through Europe and wrote about its architecture. He interviewed the major designers and architects of the day like Le Corbusier, Lies Van de Roe, Walter Gropius and Gio Ponti. Through these interviews, which were published in the U.S. between 1935 and 1936, readers were introduced not only to the work of the European architects, but to his own unusual, admiring and sometimes critical views on European architecture. Those years can be considered as the first phase of Nelson’s writing career.

When Nelson came back to the United States, he worked, for the most part, as a journalist for the architectural magazine the ‘Architectural Forum’. He wrote about modern designs, the needs of modern American families, and consumerism which was changing the idea of a ‘house’ and the use of interior spaces. In 1945, Nelson and a colleague from the Architectural Forum magazine wrote the book ‘Tomorrow’s House’. It was an unusual book in which the authors not only put forth their ideas about the mid-century modern architectural style, but also introduced the concept of need-based designs. The utility of rooms, especially the living room, was a matter that the authors devoted considerable attention to. Nelson and Wright wrote that the mid-century modern style should be used as a tool to find solutions to the problems and needs of house owners. The ‘Storagewall’ was the most revolutionary concept in the book. It was an idea that took shape when Nelson’s publisher pressured him to finish the part on storage. “I was sitting in my office, staring at the wall, miserable; we had just had another angry call from the publisher. I was looking at the wall and something in my head said, ‘What’s inside, how thick is that wall?’. I thought, ‘Who cares how thick the wall is, it’s probably 4 or 5 inches, go away.’ And again, the real feeling of a dialogue with an unwanted visitor: ‘What is inside the wall?’ ‘Hollow tile with plaster on top of it’ ‘What else?’ ‘Nothing.’ ‘Do you mean there is a vacuum?’ ‘Not a vacuum, air’ ‘Air’ was the trigger. Suddenly all those unrelated things crashed together and I realized that the essential element in any storage unit of any sort or size was air. A closet has so much air. And I thought, ‘My goodness, if you took those walls and pumped more air into them and they got thicker and thicker until maybe 12 inches thick, you would have hundreds and hundreds of running feet of storage. It didn’t take enough inches off the room on either side to be noticed’ ”, Nelson is quoted to have said. The Storagewall created a sensation in the world of design, and Tomorrow’s House became a bestseller. The idea was so revolutionary that for the first time, architecture blended with furniture, making it both, modular and flexible.

At the time when the Storagewall revolution was in full swing , the sudden death of Gilbert Rohde had left Herman Miller Furniture without a chief designer. D.J. DePree, the founder of Herman Miller, wanted someone who was innovative and original in his ideas for the position. An article in Life magazine about Nelson’s Storagewall attracted his attention and he got in touch with Nelson for the job. Nelson was interested in writing about architecture, and not really in actual designing. DePree and Nelson discussed and negotiated for a long while, and in the end, DePree was successful in bringing Nelson to his company. This spiked Nelson’s interest in the practical aspect of architecture and motivated him to open his own office, George Nelson & Associates, eventually. Nelson worked with DePree for 25 years and succeeded in bringing talented artists and designers like Isamu Noguchi and Charles Eames to Herman Miller. Eames had first caught Nelson’s attention in 1940 during the MOMA’s ‘Organic Design in Home Furnishings’ contest in which Eames stood out with Eero Saarinen in the woodwork section with their presentation ‘Conversation, Relaxation and Lounging’

Nelson designed his first collection for Herman Miller in 1947. It was a grand success, with announcements such as ‘Available now, the best furniture in years’. George Nelson’s work with Herman Miller resulted in some of the most famous and most iconic pieces of mid-century modern furniture like the Marshmallow sofa, the Slat Bench, the predecessor of the contemporary L-shaped office desk, the CSS (Comprehensive Storage System), the Swaged-Leg Chair and the Sling Sofa. All of Nelson’s designs flowed from his idea that “total design is nothing more or less than a process of relating everything to everything”. With this principle as the basis of his work, all his creations focused not only on style, but also on human beings and their needs. George Nelson’s commitment to understanding the needs of people and his constant effort to blend function and design perfectly in his work, secured his place among the most revolutionary artists of Mid-century modern design and architecture.