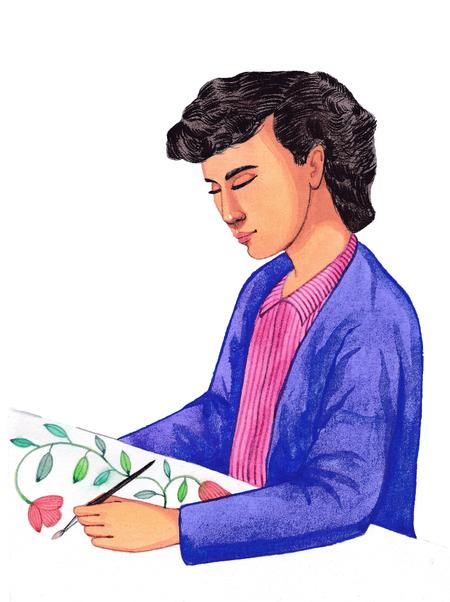 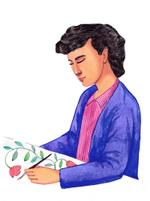 Edna Martin was a Swedish textile designer and artist from Gothenburg. She was born Astrid Edna Elvira Johansson in 1908 in the Old City Parish, she completed her education at the Handicraft School in Gothenburg. Between the years 1946 and 1951, Edna served as the artistic director of Svensk Hemslöjd or Swedish Handicrafts. Swedish Handicrafts was a powerful organization, and it aimed at promoting and encouraging home crafts in Sweden. For the next 26 years Edna was the Director of The Friends. She also worked as Head Teacher at the Royal College of Arts between 1957 and 1969, and was made Professor in 1980.

Edna was also the Artistic Director and Manager of Handarbetets Vänner or the Society of Needlecraft, which was an organization founded in 1874 and aimed at encouraging textile art. Under her tutelage, the Society’s focus shifted from commercial textile to monumental art. In her capacity as Artistic Director, she worked in collaboration with famous artists like Lennart Rohde, Siri Derkert, Ingegard Möller, and Olle Baertling. She also roped in Sten Kauppi and Kaisa Melanton, and collaborated with them to design monumental textile art. She created a juxtaposition of ancient weaving techniques and modern free-form art, and thereby transformed the Society.

Edna had a close association with Sten Kauppi. Their friendship began in the ‘50s, and although they hadn’t met more than twice, they kept in touch. Kauppi was Edna’s protégé. She helped him with his technique and even helped him procure quality material for his work. A large part of his success was due to Edna. After Sten’s embroidery became popular through Brodöserna of the Friends and was sold to the National Museum, he won many church assignments. Edna too, worked with churches and designed many chasubles along with Kauppi and the Friends.

Edna Martin and Sten Kauppi ‘s friendship eventually soured. She was known to have said, at Kauppi’s exhibition in Waldemarsudde in 1997, “There has been talk about how much I meant to Stone, but no one has talked about how much Stone has meant to me”. She also mentioned in a letter that Sten was a diva, and as such he was always dissatisfied with something.

Edna Martin was also an entrepreneur, who began her own creation after her retirement. Her designs were closely weaved, decorative and richly coloured. Her embroidered cushion covers were all over the homes of Sweden in her days. She took her inspiration from the island of Oland, which was her summer home. She shunned traditional women-oriented designs and weaving styles and began to look for male textiles. She experimented with a number of materials until she found her own style. She stepped out of the traditional bounds of textile design and found inspiration in local materials like the fisherman’s net, the flags, and the thin silk cover employed by book-binders. Soon her signature materials evolved to be the net, veil, thread and silk cloth. She conceptualised and created six motifs – Animal skins, embroidery, chips, buoy, äretäcken and saddle cloths. Her oeuvre includes a variety of upholstery, carpets, embroidery and silk work.

Martin has had a number of exhibitions to her name. Her textile art was first exhibited in 1923 at Röhsska Museum Gothenburg. Her work has graced a variety of museums like the Kalmar Art Museum, the American Textile History in Boston, the National Museum in Stockholm, and the museum in Trondheim. She had three children – Suzanne Beckeld, Joachim Martin and Barbara Martin Korpi. After she retired, Åsa Bengtsson took her place in 1978.