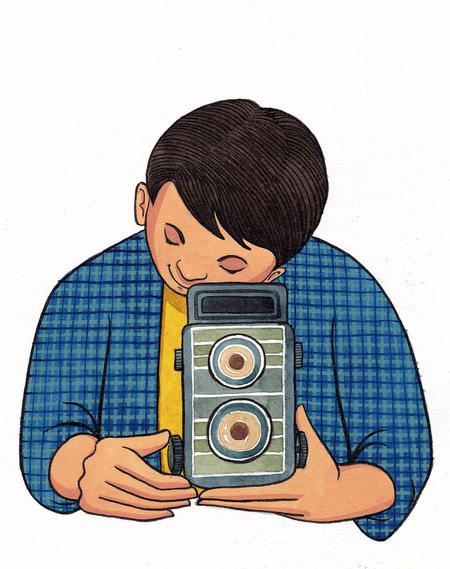 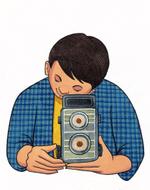 The Yashima Seiki Company was founded in 1949 in Nagano, Japan. With an initial investment of $566 and eight employees, the company manufactured components for electric clocks in the beginning. They moved on to making camera components by and by, and their first complete camera, the Yashimaflex was brought out in June 1953. The Yashimaflex was a twin-lens reflex (TLR) medium-format camera that was created for the 6 x 6 cm medium format film. The first models of the Yashimaflex used Tri-Lausar lenses, and the next few used Yashikor and Yashinon lenses. The Tomioka Optical Works was the manufacturer of these lenses for Yashima, starting a relationship that lasted for many years. In late 1953, Yashima Seiki Company was named Yashima Optical Industry Company, Ltd.

The Yashica, Inc. was founded in 1957 by Yashima. It was originally a subsidiary branch in New York City to manage and oversee the marketing operations in the United States. A popular new TLR camera series, the Yashica Mat line, and an 8mm cine movie camera were introduced by Yashima in 1957. By 1958, the company’s employee force increased to about 1,982. In the same year, with the acquisition of the Nicca Camera Company, Yashima changed its name to Yashica Company, Ltd. The acquisition of Nicca proved to be a happy occurrence, as Nicca came with a number of designs which helped Yashica expand its product line to include the advanced 35 mm rangefinder cameras.

In 1959, Yashica brought out the Yashica Pentamatic, an advanced 35mm Single Lens Reflex (SLR) camera. It had interchangeable lenses, a proprietary bayonet-mount, an automatic diaphragm which came only with the Auto Yashinon 50mm/1.8 lens. Yashica’s lenses continued to come from the Tomioka Optical factory. Zunow Optical Industry Co. Ltd. was a small company that had made a name for itself by producing a very advanced 35mm SLR camera, and several superior quality, fast 35mm camera and 8mm cine lenses with a proprietary bayonet-mount lens system quite similar to Yashica’s Pentamatic. In around 1959 to 1960, Yashica took over the assets of the bankrupt Zunow, and with the aid of Tomioka Optical Works, adjusted and altered Zunow’s lens designs and made its own 8mm turret cine cameras.

Yashica faced the same problems as Zunow, with its proprietary SLR lens mount not receiving a favorable response in the market. To get over this problem, Yashica redesigned its camera in 1962 with the Contax/Praktica M42 lens mount. This camera was called the Penta J. The Electro 35, the world’s first electronically controlled 35 mm camera that was commercially successful, was introduced by Yashica in December 1965. The Electro 35 was a rangefinder camera which gained immense popularity among the public and sold, along with its variants, some 8 million units. The company’s business continued to expand in international markets, and in 1968, it acquired its old associate, the Tomioka Optical and Machine Manufacturing Co. Ltd., which had by that time grown into one of the largest and most esteemed lens manufacturers in Japan. 35mm SLRs continued to grow in popularity and sales, and Yashica was gaining a reputation for expertise in electronic cameras, and superior quality optics. 1968 was also the year in which Yashica designed its last major TLR camera, the Yashica Mat-124. This model had an assemblage of some of the best features of all the earlier Yashica TLR models.

The TL Electro-X 35mm SLR camera was introduced by Yashica in 1968. For its interchangeable lenses, it had a screw thread mount - the M42 lens mount. It was also fitted with an all-electronic through-the-lens exposure meter in the viewfinder that used LEDs. The shutter in the camera was the electronically controlled Copal Square SE shutter, a vertically-travelling metal blade focal plane shutter made by the Copal Corporation. This popular camera was in production till 1974.

Yashica’s TL Electro 35mm SLR camera was introduced in 1972. This camera was similar to the Asahi Optical Company’s Pentax Spotmatic camera. The same electronic exposure LEDs were used in this camera as in the previously made Electro-X. The camera also had the M42 threaded lens mount for its interchangeable lenses. Yashica and Carl Zeiss began a collaboration in 1973, and jointly worked on what was called the ‘Top Secret Project 130’ to produce a new, professional 35mm SLR equipped with an electronically controlled shutter. It bore the Contax brand, and was called the RTS for ‘Real Time System’. Carl Zeiss designed a new line of high quality Yashica/Contax lenses for the camera with a common C/Y bayonet mounting that allowed lens interchange between all the 35mm SLR camera models of Contax and Yashica. An ergonomic and styling study of the new camera was conducted by the F. Alexander Porsche Group. The new Contax RTS became a commercial success as soon as it appeared in Photokina, 1974.

Several new SLR cameras were introduced by Yashica after the success of the Contax RTS. In 1975, FX-1, and in 1976, the FX-2 was introduced. In the same year, with the Contax RTS doing very well, Yashica designed the upmarket Yashica FR, with some features of the RTS like its electromagnetic shutter release. The FR camera had the capability to use the full range of Carl Zeiss T* lenses. In a series of contemporaneous tests, the FR was found to be tougher in some ways than the costlier Contax RTS. It also had a better sealing mechanism against dust and other harmful contaminants. Yashica kept up this practice of matching or pairing similar models of Contax with Yashica models that were not so full of features, but were of a high-quality and affordable for the next ten years. FR-I and FR-II, both introduced in 1977, followed the launch and success of the FR. The FR-I was a 35mm SLR that incorporated even more features of the RTS. It had an electronic shutter with the manual, and the aperture priority mode. The FR was a high point for Yashica, and took it to a place from where it could compete with brands like Nikon, Canon and Minolta, in the semi-professional SLR camera market.

A new, inexpensive 35mm consumer SLR, the FX-3, was brought into the market by Yashica in 1979. Entry-level buyers were the target group of this affordable camera, which, like all the manual-focus bodies of Yashica, had a C/Y lens mount that would also work with Carl Zeiss T* lenses. The FX-3 was a commercial success, and with a few changes and alterations over time, it stayed in production till 2002. Ceramics giant Kyocera acquired Yashica Company Ltd. in October 1983. While some outward changes happened as a result of the merger, the tradition of ‘pairing’ of high-end Yashica SLR models with Contax (159mm) was continued by the manual-focus (MF) FX-103 Program introduced in 1985. This was the first Yashica SLR camera with TTL flash and exposure capacities that were full programmed.

Kyocera took up the marketing of all Yashica cameras after 1983. Yashica faced stiff competition in the market from other manufacturers, especially Minolta which had launched an advanced autofocus 35mm SLR camera which was also competitively priced. Yashica’s decision to introduce its own autofocus 35mm SLR camera line did not pay off, because the camera was overpriced and badly marketed, when compared to its competitors. Kyocera then made a decision to reposition and repackage the brand as a budget-priced point and shoot line of cameras. The production was moved from Japan to Hong Kong, and the high-end SLR camera production was stopped.

The production of all Contax, Yashica and other film and digital cameras of the Kyocera brand was discontinued in 2005. Hong Kong-based MF Jebsen Group purchased the trademark rights of Yashica in 2008. It is now under JNC Datum Tech International, Ltd., a subsidiary of MF Jebsen. Digital cameras, digital camcoders, digital photo frames, portable DVD players, digital audio players, digital voice recorders, binoculars, mobile phones and SD cards, are the Yashica products offered by the JNC Datum Tech. 100 Enterprises International Group Co. Ltd. was made the Global Sole Agent of Yashica in March 2015.

TLR cameras were produced by Yashica from the early part of the 1950s till the late 1980s. Although not all of them were very good, they can all be considered as good value for money. Information about Yashica models after the Yashicaflexes is available on a few sites. Peter William’s site offers details on the lenses and models. Barring a few mistakes in the details, the information is well researched and presented. Yashica’s range is covered but sketchily by Sugiyama and only a little better by McKeown.

Yashica was called Yashima Optical Seiki till 1958.The Yashimaflex, introduced in 1953, was the precursor to the famous Yashicaflex. The Yashimaflex is an evolved model of the old Pigeonflex made by the Shinano Optical Co. Two Pigeonflexes are shown on the Sugiyama, one from 1953, made by Shinano and the other from 1954, made by Yashima. Since the earlier model seems to be the Shinano product, it would not be wrong to assume that Yashima took over the production of the cameras from Shinano and produced the Yashimaflex for a short time, alongside an improved version of Pigeonflex. However, this is an assumption and cannot really be confirmed. It might well be that Yashimaflex was Pigeonflex under a new name.
The more sophisticated and advanced Yashicaflex cameras made their appearance in 1954. The first model was the revolutionary Yashicaflex S, the first Japanese camera with a selenium meter. Most websites seem to be only really interested in the Yashica and the Yashica Mat TLRs, and mostly overlook the Yashicaflex series, which came before and then was produced along with Yashica and Yashica Mat TLRs. No convincing reason presents itself as to why Yashica used the name variants. If one were to conjecture, the company seemed to consider Yashicaflex as similar to Rolleiflex, and Yashica, to Rolleicord. Even if this were so, the structure or approach soon changed. Automated crank-winding like Rolleiflex was not used on the Yashica TLRs until the Yashica Mat series.

A lot about the Yashica story seems difficult to understand, however. The first ‘Yashica’, the ‘A’, has to date from rather earlier than 1957, when the first ‘Mat’ was introduced. But 1957 was a time when the late ‘flexes’ were still being manufactured. Yashica’s first appearance is said to be in 1959 by McKeown, who bases his idea on the Yashica A-III and Yashica-A models on Sugiyama’s site. All of this makes a little sense when one finds out that both the Yashica models, A & D were available in 1964, as shown in a small brochure. Ivor Matanle, in his 2005 AP article agrees with McKeown and says that the ‘Yashica’ series came after the ‘Yashicaflex’ series. It is a surprise, though, that Yashima used old designs and features for their later models.

Made by Yashica
1949
Nagano, Japan