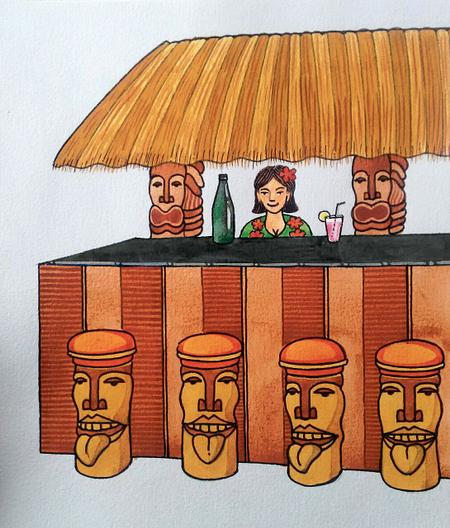 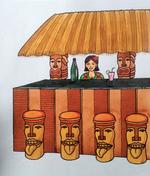 Burke Hovde, the son of one of Witco’s co-founders Ron Hovde, writes about the history and journey of Witco. Burke grew up with Witco wall hangings and furniture in his parents’ house and in their family cabin. Starting out as Western International Trading Company formed to import South Pacific home furnishing items like Capishell Lamps, Witco also acquired carvings. These carvings were made into rough, cedar chain-saw carved furniture and Tikis – something most people know Witco for. Witco’s artwork and production plant was in Mt. Vernon, Washington. In the 1970s, Witco sold products worth $15 million throughout the world.

Ron Hovde and Bill Westenhaver published the book ‘Fun and Profitable Chainsaw Carving’ under the name of their company Westho, which is now available in Burke Hovde’s EBay Storefront. America was gripped by ‘Tiki fever’ in the late 1950s. Polynesian-themed bowling alleys, golf courses, television shows, pop music and Tiki temples inundated America from coast to coast. The one place that was left untouched was the American home. Witco changed this by mass producing primitive decor and home furnishings, making it possible for Americans to bring Polynesia right into their living rooms.

The success of Tiki was due in large measure to cartoonist and artist William Westenhaver, who had started out wanting to be a graphic-designer and painter, and had studied at the Art Center School of Design in Los Angeles in the late 1940s. His early work showed the influence that Picasso and some European impressionists and expressionists had on him. These artists had used Polynesian primitive art as sources of inspiration, and Westenhaver, having visited Melanesia during his time with the navy was no stranger to it himself.

However, it was only in the late 1950s that Westenhaver was able to blend his modernist artistry with the native art. In 1957, Westenhaver’s cousin Bob Post called to ask if he could help design some primitive artifacts that WITCO was importing from Mexico. At the time, Westenhaver was earning little as a cartoonist, and grabbed the opportunity his cousin offered. He moved with his family to Mt. Vernon, Washington, where he and the other WITCO artisans began their task of carving and sawing a range of unusual tribal designs to make them into bedposts, tables, chairs and many other home furnishings. These artists often used striking leopard-skin prints to accent the pieces. Masks, spears, statues, home tiki bars and other island décor came next. American architecture of the time was of a clinical, steel-and-glass minimalism kind. This ‘Pop Primitivism’ gave American homes an air of odd, exotic fancy. This primitivism did not just appeal to some eccentrics in Middle America. Elvis Presley’s Graceland Mansion had a ‘Jungle Room’ fitted with nothing but WITCO furnishings. WITCO items were also found in the homes of popular icons Hugh Hefner and Roy Orbison.

With showrooms in most major American cities, WITCO had reached its highest point in the late 1960s. The end, then, came because there was nowhere else to go. After the cultural changes and near meltdown in the late 1960s and the early 1970s, WITCO’s business slumped and came to an end in 1977. Westenhaver went on to work as a freelance artist once again. The Tiki story does not end here, though. Westenhaver’s grandson-in-law, Ken Pleasant, took advantage of the 1990s revival of interest in tiki, and carved his own WITCO-style furniture, to the great satisfaction and delight of Bill Westenhaver.