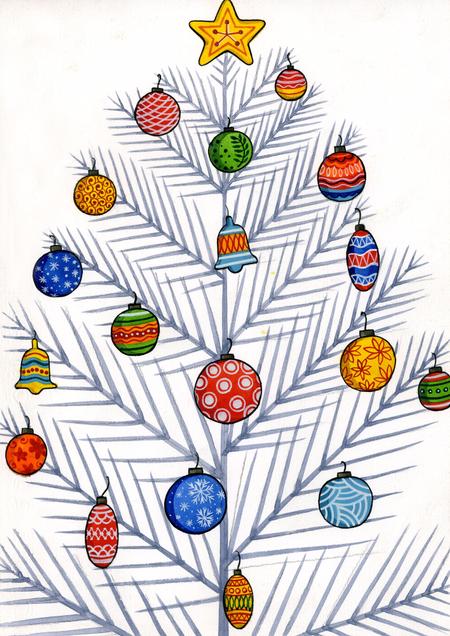 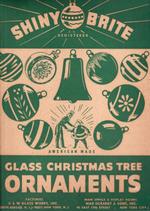 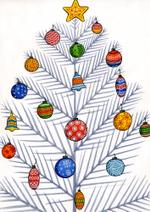 Shiny-Brite was well-known as the most established ornament-maker for Christmas trees in the United States between the 1940s and ‘50s. The cornerstone for the Shiny-Brite company was laid somewhere in the year 1907 when Max Eckhardt began importing hand-blown glass balls from Germany. Eckhardt was wise enough to predict an interruption in his supply due to the upcoming war and early on planned for this eventuality. He began producing ‘Shiny-Brite’ Christmas ornaments in collaboration with the Corning Glass Company in 1937. Corning, which was a maker of light bulbs, modified their manufacturing process to produce clear glass ornaments. Eckhardt’s factories received these shipments from Corning and decorated them by hand. Shiny-Brite products were keenly advertised as ‘American-made’, and this became their selling-point during the second World War.

The hooks of the ornaments have differed over the years. Thus a study of the hooks enables their dating and identification. The very first Shiny-Brite ornaments had a standard metal cap, hoop and hook. The hook, which was fastened to the hoop, was used to hang the ornament from the tree.

In the 1940s, the war brought about a replacement to the metal cap. Instead, a cardboard tab was used. The owner would loop in some string through the tab of the ornament in order to hang it. After the war, a new range of ornaments were introduced, all of which had a unique metal hook. The hook had two hanger-lengths. The hook went through the entire length of the ornament and was fastened at the bottom. The bottom bit could be used to create a ‘short’ hanger. The owner could detach the bottom fastening to create a long hook. Thus the ornament could be made to dangle at a greater distance from the tree branch that it was attached to. This feature was particularly useful in filling up the sparsely foliaged parts of a natural tree.

In 1958, since the introduction of the artificial aluminium Christmas tree, the new ornaments began to lose their popularity. The new trees were evenly foliaged and had no sparse areas. Customers did not need the special hanger-lengths anymore. Moreover, the extra wire needed for the lengthy hanger added to the cost, and the new hanger was withdrawn in 1960. In its heyday, Shiny-Brite had four factories in New Jersey, at Irvington, Hoboken, North Bergen and West New York. The head office and showroom was at 45 East, 17th Street in New York City. Christopher Radko has been releasing some of the more popular ornaments since 2001.