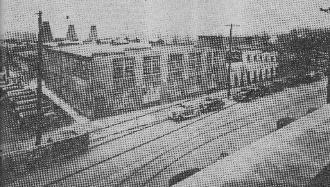 The Royal China Company, a manufacturer of tableware, was established in 1934 in Sebring Ohio. The company first started production in the E.H Sebring China Company plant. Collectors and researchers today have a tough job determining the period of a pattern. Researchers have not been able to ascertain the detailed history of the company either. This is due to several reasons - Dinnerware was produced in groups called ‘series’. The dinnerware patterns in the series changed every year. Moreover a series would have many different ‘shapes’ and different series sometimes had identical patterns. Further, in 1970, a fire ruined all records of the tableware. Thus dating the tableware and identifying the series is not easy.

Most collectors today focus on three important series of colonial-styled tableware – Currier and Ives, Colonial Homestead and Old Curiosity Shop. All three have been designed and improved by Gordon Parker. Currier and Ives first came into the market in 1949 and was continued till the 1980s. It had an ivory background and was made in blue, brown, green and pink colours. Currier and Ives was sold as a specialty item at A& P Grocery chain. The sales at large department stores and catalogue ordering companies like Sears and Montgomery were especially high and the pattern’s popularity skyrocketed.

Old Curiosity Shop was in the market during the 1950s while the Colonial Homestead range, sold by Sears, ran from the early 1950s and to the late 1960s. In 1964, the Royal China Company purchased the French-Saxon China Company, Sebring. Although it began production as a subsidiary company, the fire in 1970 forced Royal China to shift its operations to Sebring. The Royal China company was sold to the Jeanette Corporation in 1969. In the meantime, Royal China began operating the Harker production plant till its termination in 1972. In 1976, the Jeanette Corporation, along with all its subsidiary companies was sold to the Coca-Cola Bottling Company, New York. Royal China again went through a series of ownership changes, by first being acquired by the J Corporation, which was owned by a group of Boston private investors, in 1981 and then by the Nordic Capital of New York in 1984. In spite of all these changes, the Royal China brand name was not changed. The company ceased production in 1986.