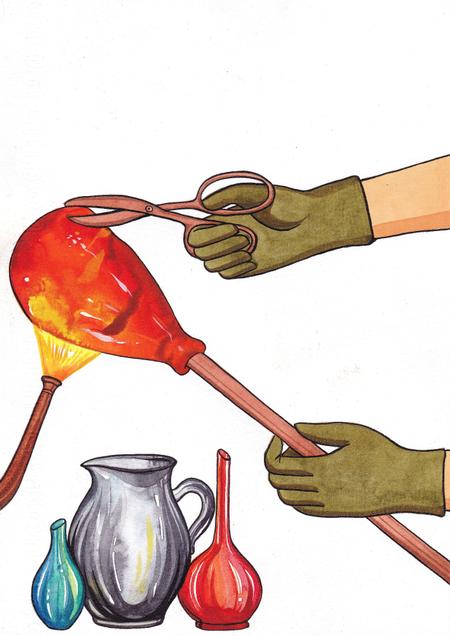 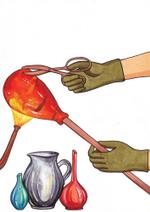 Orrefors glassworks (named after the village it originates from) was a glassworks in Småland, once part of the Swedish glassworks group Orrefors Kosta Boda AB. They are known for producing high-quality crystal glassware and art glass, such as crystal stemware, barware, vases, and sculptures and also some lighting products.

Orrefors was established in 1898. Consul Johan Ekman’s takeover resulted in a change in the factory’s products, as they began producing drinking glasses, vases, and other house-ware items, evolving from their old window glass and bottles. People like Eugen and Knut Bergkvist (brothers who once worked at Kosta Boda), Fritz Blomqvist, and Heinrich Wollman were hired.

The first art glass was imitated in the style of infamous French glassworks, Daum and Gallé. The illusion of making bright crystal seem like frozen liquid was characteristic of their designs, for which they were greatly admired at the Paris Exhibition in 1925. Another technique named Ariel – named on a character in The Tempest – was later devised (1936) that trapped the air within the walls.

During the interwar period, Orrefors was one of the top producers. The factory has endured even now and some of their more famous older designs are seen to be produced. However, what they’re most known for now is their one of a kind chandelier-making. Recently, Orrefors had announced of their collaboration with famous fashion designer Karl Lagerfeld. In the spring of 2011, the first collection “Orrefors by Karl Lagerfeld” was finally released.

Orrefors first produced art glass in 1917. The experimentation with Grail glass had begun in late 1916 itself but it expanded primarily during 1917. In April, 1917 art glass and custom glass were first displayed in Stockholm. They came to be known as “more beautiful articles for everyday use”. This success only grew as by autumn of 1917, Orrefors was hosting exhibitions in Norway as well. It was evident that a rapid change was occurring in the glass industry. This was only the first step for Orrefors. By the 1920s, engraved glass dominated the Orrefors collection. This glass is presented as being covered with skillfully engraved décor, exquisitely designed. The inevitable international breakthrough finally arrived during the Paris Exhibition in 1925. Here was where Orrefors received their first Grand Prix Medal.

New types of glass were now being experimented upon, some even without any pre-sketching. It developed to be thicker and more massive, often having a black base, while the engraved decor became sparse. Their goal was now to draw out the “inner beauty” of the glass. Vicke Lindstrand (1928) joined them next and made his debut at the Stockholm exhibition where vases and bowls in enamel painted décor, along with engraved pieces, were showcased. Edvin Öhrström also arrived in 1936. Sven Palmqvist returned to Orrefors in 1944 and presented a new art glass series (named “Kraka”) with a more subtle decor that covered the surface like a net. This name originated from a Norse saga of a young girl in love who came to her lover clothed in only a fish net. Another series, dubbed The Ravenna series (named after mosaics in its namesake city) was launched in 1948. Both of these were hugely successful!

Orrefors also gained international success due to its adept skill of uniting both beauty and usefulness, something difficult for most. The infamous vase, “The Apple” forged by Ingeborg Lundin symbolizes this golden era. Next, Gunnar Cyrén was hired in 1959. His unique "Pop-glass" came to be associated during this time as it was appropriately dubbed the “Pop Period”. Alongside him, Olle Alberius, Lars Hellsten, and Jan Johansson also joined the factory. The Grail technique made a comeback and was popularized again due to the sudden high demands of handicraft skills. Eva Englund, a gifted designer, was mainly responsible for this among others.

As would be logical, production of glass created by departed designers came to a halt. The Gallery concept was then introduced, aiming to popularize collections of art glass designed by the current artists. One collection that received a strong response both in Sweden and abroad was Eva Euglund’s figurative grail glass. A couple of new artists also joined Orrefors including Anne Nilsson, Erika Lagerbielke, and Helén Krantz. Due to art glass’ constant progression and developing culture more artists joined, including Lena Bergström, Martti Rytkönen, and Per B Sundberg. They would go on to be a great help for the upcoming millennium.

Orrefors celebrated their 100 years anniversary in 1998 with a multitude of grand art glass exhibitions all across the world. Ingegerd Råman was the first to be hired in the new millennium, an accomplished glass designer and professor. Many new designers have joined Orrefors since then and their significant contributions to the current collection make it all the better even now.