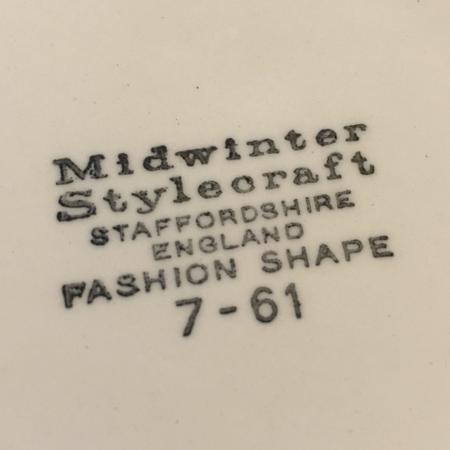 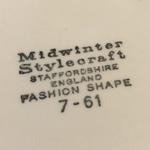 William Robinson Midwinter had started the tableware designing and manufacturing firm Midwinter Pottery, initially called as W.R. Midwinter, in 1910 in Burslem, Stoke-on-Trent. In its early years, Midwinter was into the production of Brown Betty teapots, tea sets, along with ceramic wares for the toilet. The 1920s and early 30s brought some recognition for Midwinter for its semi-porcelain tableware line called Percelon, which included dinner, tea, and coffee sets.

Its products from these early years, though of nice quality, are traditional in their design, and therefore, not particularly collectible. But the Art Deco motifs on a few of the pieces are worth looking out for. During the 1930s, employing over 700 employees, Midwinter Pottery was among the larger potteries in the whole of England.

Though Midwinter was one of the well-known players of the British tableware market till then, it wasn't until Roy Midwinter, son of William Midwinter, took the leadership in the 1950s, that the company truly became pioneering and aesthetic-oriented in its approach. Roy’s entry into company coincided with the lifting of restrictions placed due to the World War 2, and G-Plan’s strategy of selling one piece at a time. He shuffled up the whole company and began encouraging talented, modern designers such as Jessie Tait, Terence Conran, Hugh Casson, John Russell, Peter Scott, etc..

A few master strokes on Midwinter’s part in this time, were to sell its pieces individually, so that customers buy whatever they wanted; and to cash-in on the popularity of the patterns on their dinnerware and other products, by getting Midwinter’s sister company Clayburn Pottery to manufacture accessories such as centre pieces, lamp bases etc., with the same patterns so that they would complement each other; for instance, the famed dinnerware pattern by Jessie Tait, Spanish Garden could be found on cutting boards, tea sets, bread bins, etc., on both Midwinter and Clayburn products. To keep up with the demand, Midwinter bought 2 potteries in 1964, namely A. J. Wilkinson Ltd and Newport Pottery Co. Ltd.

Unfortunately, In the late 60s, Midwinter faced huge losses due to back to back flop tableware lines, and was bought by J. & G. Meakin; however, even that move couldn't reclaim its luck, a couple of years later, Wedgewood bought Meakin & Midwinter. Even though Wedgewood continued to sell products under the Midwinter brand for a decade and a half, finally in 1987, after a historic journey of more than 77 years, it stopped using the Midwinter name.

However, products of Midwinter Pottery, especially from the Roy Midwinter era, have become valued vintage pieces and are much in demand now. Midwinter Pottery had been an average sized company and hadn't yet gained its name for pathbreaking design in the years just before and after the World War 2. Due to the government restrictions which had been in place from the start of World War 2, Midwinter and the rest of potteries in Britain only produced dinnerware devoid of any patterns, colours and embellishments for local use, and traditionally patterned wares for exporting purposes. After the lifting of restriction in 1952, Midwinter came up with its modernistic Stylecraft range in 1953, the creation of which turned the tables for Midwinter.

Roy Midwinter, who had been to Canada to gauge the market for their ware there, had received a less than favourable reaction there. Midwinter’s products were too drab for the people in Canada who were already fans of the modern styles, shapes and motifs being churned out by up and coming designers from America. Upon learning about this, Roy went to California to observe the works of some of the revolutionary designers, namely Eva Zeisel, Russel Wright and Raymond Loewy. Impressed by their freeform shapes and abstract, organic patterns, which were in stark contrast to the plain ware they were selling back in UK, Roy and his designing team worked to create a line that would bring contemporary elements to their products, while trying not to shock the rather conservative buyers in UK.

Consequently, Stylecraft was launched in 1953 in 40 distinct shapes and 36 unique patterns, with the plates and trays being squarish with little brims. For the people, it was a windfall, as dreary wares of wartime were done with, and new, exquisite and bold designs coming forth. They accepted the Stylecraft range wholeheartedly.

Introduced in 1954, the Fashion line, designed by Roy Midwinter and fellow director William Lunt, was manufactured until the late 60s. It was totally liberal in its designs, with shapes and styles that drew away from old-fashioned wares and embraced the modern design completely. The plates and trays had no rims, while the shapes of jugs, cups and bowls were in freeform. To bring this range to a traditional market like Britain was a gamble Roy Midwinter took.

Among the more than 120 motifs on the Fashion line, some patterns which were used earlier on Stylecraft were tweaked and relaunched, such as Sir Hugh Casson's Riviera which was reintroduced as Cannes and Sir Peter Scott’s Wild Geese. Some exemplary patterns in the Fashion shape are Nature Study and Plant Life by Terence Conron; and Pierrot and Zambesi by Jessie Tait. Some acclaimed patterns were done by Eve Midwinter and John Russell.

Midwinter introduced the Fine range in 1962. Largely designed by Lord David Queensberry, who became the Marquis of Queensberry later, a doyen in modern ceramic design and a faculty at the Royal College of Art. Moving away from the fluid shapes of the Americans, the Fine range had cylindrical designs. Due to the large surface area of most of the Fine products, pattern designers were able to create elaborate motifs on them; around 70 different patterns were created on this range, including Jessie Taits’s Spanish Garden, Country Garden, Mexicana and Sienna; Roselle by Even Midwinter, and Focus by Barbara Brown. Fine went on to be another huge success for Midwinter, after Stylecraft and Fashion, and was manufactured until the 80s. To facilitate the pattern designers in creating patterns without any disturbance, the Fine range was upgraded by limiting protrusions, which was then called MQ1.


Designed by Marquis of Queensberry in 1966, the MQ2 was dissimilar to Fine; it was no longer cylindrical, but curvaceous in shape. The range wasn't appreciated much by the public, and its production probably stopped in 1968. Of the 4 motifs found on MQ2, Pierrot by Nigel Wilde is well known.

The classic Stonehenge range was released in 1972, and was created by Roy Midwinter with the help of in-house modellers Sydney and Derek Machin. The patterns were done by Jessie Tait, Eve Midwinter and team. The Stonehenge range consisted of solid shapes, bold patterns, which were screen printed on to the wares to create the striking look of the range, and the look of handcrafted pottery.

At first, Stonehenge had 4 patterns Blue Dahlia, Bluebells, Flowersong and Medallion, which all had a matt-finish. Later the same year, 7 more patterns were added to the range. However, the Sun, Moon and Earth patterns, which were designed by Eve Midwinter and released in 1973, are considered to be the best of Stonehenge.

The Stonehenge products, though having a matt-finish, had a flecked uneven glaze on them, with iron oxide bands on the rims that were done by hands, lending an overall studio pottery impression to the wares; moreover, the earthy themes of the range also appealed to the masses.

There are over 60 patterns on the Stonehenge line, including Autumn, Spring, Invitation, Wild Oats by Eve Midwinter and ‘Nasturtium’ and ‘Caprice’ by Jessie Tait. Additionally, after Wedgewood took over Midwinter, it continued with the Stonehenge line, and used a clever strategy of redesigning old motifs to create new patterns. It used Clarence Cliff’s patterns for Newport Pottery Co. Ltd., a company which Midwinter Pottery had bought and consequently held the intellectual property rights to. These designs include ‘Melons’, ‘Crocus’ and ‘Oranges and Lemons’.

Most of the Stonehenge motifs were created in the early 70s. However, due to their continued popularity, Wedgewood continued producing some patterns until mid-80s. The iconic Sun pattern may have been manufactured till 87 when Wedgewood stopped using the Midwinter Pottery brand name. In fact, Wedgewood is said to have produced Stonehenge ware under the Johnson Bros name. Midwinter’s other important tableware ranges include Hudson (1946), Saladware (1956), Midwinter Modern (Melamine tableware, 1958), Trend (1966), Portobello (1967), Stoneware (1972), Style (1983) and Reflex (1986).

Midwinter Pottery manufactured a line of animal figures in early 1940s which were modelled by Nancy Great-Rex. Later in 1950s, Colin Melbourne also designed another range of animal figures in black/ white matt finishes, that are much sought after now. After the Wedgewood takeover, Roy Midwinter continued to work there until 1981, when he opened his own design studio; Jessie Tait worked under the Johnson Bros section from 1974; Eve Midwinter worked in Wedgewood till 1986 and later became a freelance designer.