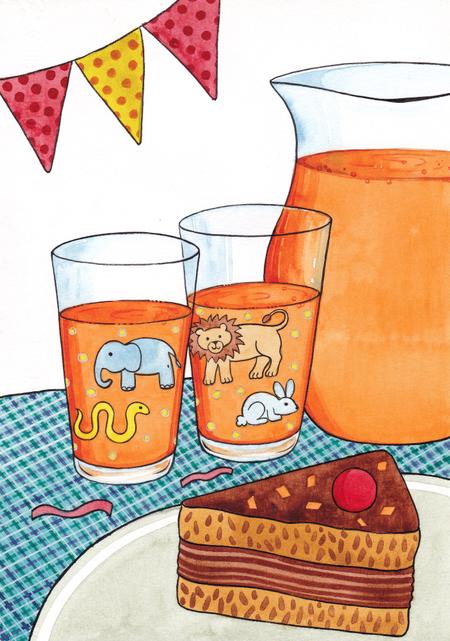 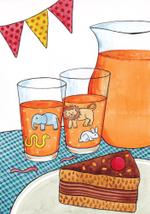 The history of the Libbey Glass Company goes back to 1818, when it was established in East Cambridge, Massachusetts, as the New England Glass Company. Purchased in 1878 by William L. Libbey, its name was changed to New England Glass Works, Wm. L. Libbey and Sons Props.
The Wm. L. Libbey and Sons Props. relocated to Toledo, Ohio in 1888. Ohio was ideal for glassmaking, because of the large deposits of natural gas, and the availability of sand of a good quality - two important elements in glassmaking. Also, Ohio had better than average road, rail and steamship links.

The name of the company was changed to the Libbey Glass Company in 1892. An English designer, Joseph Locke, joined the company in 1882. He patented many unique types of glass like Amberina, Peach Blow, Maize and Pomona, which were made of expensive materials and made by hand. The amber to red color of the Amberina glass came from gold, and the Brilliant Cut glass, one of the most widely produced of Libbey manufactures, used a heavy amount of lead, which some experts claim was almost 60 percent.

Libbey was best-known for its cut glass, but also produced window glass, containers, household items and bottles. Inventor Michael Owens joined the company in 1916, and put together a machine that produced bottles, tumblers and glass chimneys. This invention resulted in higher profits, as the cost of personnel and manufacturing was reduced. Also, the quantity of production increased greatly. World’s first machine-made stemware and heat-treated process for glassware used in hotels and restaurants is attributed to Libbey.

With the increase in popularity and number of automobiles in the 20th century, Libbey Glass began mass producing windshields. The company earned Toledo the name of the ‘glass capital of the world’. In the 1920s, the popularity of Brilliant Cut glass had dropped due to the shortages that World War I had caused. Libbey decided to focus on products that did not require labor to a great extent - products like the ‘Safedge Glassware’ which was mass produced for use in hotels and restaurants. Libbey became a part of Owens-Illinois, one of the largest manufacturers of glass in the world. The research and development of Owens-Illinois helped Libbey continue with the expansion and development of its products. Libbey Glass went public in 1993.

Libbey has acquired several companies that manufacture tabletop products, food-service utensils and consumer products, and its portfolio includes an impressive set of companies like Crisal, Royal Leerdam, Crisa and Traex. The company is now engaged in manufacturing home décor, bakeware, serveware, pantryware and beverage ware. Libbey earned a gold medal at the Chicago World’s Fair of 1893, for its excellence in cut glass. It was also honored in two exhibitions in San Francisco and Atlanta for its glass. By the end of the 19th century, Libbey Glass Company had become the largest cut glass factory in the United States, a position it carried into the early part of the 20th century.

Libbey Glass Company established a new trademark in 1896, with the name Libbey in script, and the ‘L’ and ‘y’ unconnected. A sword, symbolic of the famed steel swords of Toledo, Spain, Toledo’s European sister city, ran under the name. The trademark was in use from 1896 to 1906, and during this period, many patterns and styles of handware were introduced. Some of these appear in the reprint of Libbey’s 1896 catalogue. Brilliant, Colonna, Corinthian, Gem, Harvard, Imperial, Kimberly, Princess, were some of the most common patterns.

Libbey displayed finely cut and engraved glass in the St. Louis World’s Fair of 1904, and won another gold medal for its cut glass. The highlight of the exhibit was a 25 inch glass punch bowl, the ‘largest piece of cut glass in the world’. This bowl is now on display at the Toledo Museum of Art. A 32-inch tall three piece cut glass table in the Neola Pattern with a diameter of 28 inches at the top - another piece that was exhibited in the St. Louis Fair, is also displayed in the museum. The trademark was changed in 1906, with the sword being removed from the signature. The name Libbey remained in script, and the ‘L’ and ‘y’ were usually connected. Libbey’s best known patterns were continued from 1906 till the start of World War I. Some new patterns were also added to its line of products. Some patterns that were produced during that period were Diana, New Brilliant, Cut Flute, Kingston, Gem, Empress, Somerset, Verna.

The period between 1876 and 1915 is known as the ‘Brilliant Period’ of American Cut Glass. Deep cut glass was very popular in this period, and kept up its popularity till about 1925. This period is characterized by deep mitre cuts and patterns of hobstars, fans, and other geometric designs on heavy lead glass. ‘Rock Crystal’ and lightware was introduced in the later years of this period. The lightware was made of thinner glass, on which the decorative patterns were made by straight-line cuts, circular cuts, and sometimes, a combination of both. While the heavy lead glass had almost completely polished cuttings, the lightware items had a combination of unpolished gray cuttings and polished cuttings. Libbey produced lightware for only a brief period, and the rarity of the pieces makes them collectibles that are distinct from the heavy glass items made during the period.

Sometime between 1913 and 1919, a new trademark with a thin stylized Libbey and a circle that enclosed a connected ‘L’ and ‘y’ was introduced. It is not clear when exactly this trademark began to be used. Some of the signatures in the late 1930s had double rims, and Libbey used them until after the end of World War II. Anita Brilliant, Cherry Blossom, Gem, Gloria, Mignon, Regis, Wisteria were some of the favorite patterns of this period.

Douglas Nash came to Libbey from Tiffany, and used his experience to create a new line of glass in 1933. Tableware, formal stemware and matching centerpieces of candlesticks, bowls and vases made up the new line. The Libbey-Nash series had eighty two different patterns. More than half of the 1933 catalogue was devoted to stemware. Unfortunately for Libbey, the decision to introduce the new Libbey-Nash line came at the wrong time, with the country in the grip of the Great Depression. Libbey was acquired by Owen-Illinois by the end of 1935. The Nash line was only produced for a year or two, and this glassware is highly valued by collectors today.

Libbey’s last signature is believed to be the name Libbey in script with a sword above and below the name on the 1958 stemware patterns known as the ‘1818’ line. The same signature is found on these wares and others in the late 1950s, but with a black sticker. The ‘1818’ line was machine-made, and was like the Waterford line of handware of the Modern American Series. The ‘1818’ line was fashioned in four cut patterns. The names of these patterns were Jamestown, Raleigh, Williamsburg, and Yorktown – each name symbolic of Colonial America.

Machine-made Libbey stemware today has a molded ‘L’ in a circle. No such sign is found on the stemware in the first few years when it was made. The black sticker under the name Libbey used on pieces produced in the 1950s is significant, as it indicates the end of cut glass at Libbey. Libbey has shifted its focus to high-volume machine ware over the last 30 years. It continues to be respected as a great name in glassware. Libbey does not produce handware anymore. Nor does it produce cut and engraved glass, which makes Libbey’s cut glass and handware pieces articles of high value to the collector of American glass.

Libbey glass can be classified into the following categories. 1) Cut Glass (Brilliant), 2) Lightware - Rock Crystal, 3) Amberina - colored glass, 4) Libbey-Nash, 5) Modern American, 6) Machine made-cut, and 7) Miscellaneous paperweights, novelties, etc., made by the workers which were not sold commercially. The most famous and best period for Libbey was the Cut Glass – Briiliant Period, from 1888 to 1925. While some of the common and favorite patterns of that period were produced for quite a few years, and are easy to find, others are rare and difficult to get because they were made for a very short time.

The glassware made in other periods is not so easy to find as that made in the Brilliant Period. Almost all the handware made from 1892 to the 1940s had the signature or trademark from that time. It is important for a collector to study the trademarks on original pieces of Libbey to know the style and look of the Libbey signature and the patterns produced over the years. Some pieces may have signatures that are obscured because of wear, or are difficult to see because they are located in spots that are not obvious. A collector, then, may have a piece in his possession for years before he can positively identify the signature. Signed pieces command a 20 to 30 percent higher price than pieces that are not signed, which has led to pieces with forged, faked signatures in circulation in the market today. It is very important, therfore, for the collector to study the items that he collects.