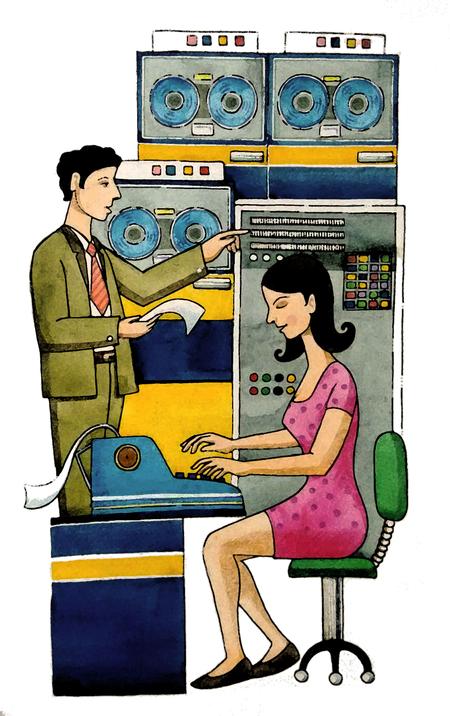 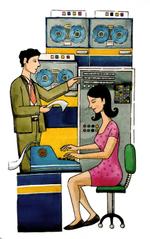 The story of IBM begins in 1890 when flocks of immigrants were entering the United States of America and the Census Bureau of America was in need of a way to measure the burgeoning population. The Bureau announced a competition to find the best and most efficient means of organizing census data. The winner of the contest was a German immigrant named Herman Hollerith who was a statistician. In 1886 Hollerith established the Punch Card Tabulating Machine Co. which soon joined with Computing Scale Co. and International Time Recording Co.

The merger formed a new company called Computing-Tabulating-Recording Co. in 1911. The company produced a plethora of products including cheese and meat slicers, commercial scales, punch cards, tabulators and industrial time recorders. Although the company was located at and serviced New York City initially, it soon set up branches in Washington DC, Michigan, Ohio and even Toronto in Canada.

Thomas J Watson took charge as the President of the company in 1914, just after eleven months of his joining. The focus area of the company at the time was custom-built large-scale tabulating solutions for clients. Watson took lead and steered the company through many a successful deal. In the next ten years, Watson established plants and offices across the globe including Europe, Asia, Australia and South America. Owing to its global presence, In the year 1924, the company was rebranded as The International Business Machines Corporation(IBM).

The years between 1931 and 1963 have been regarded as the ‘Era of Innovation’ for IBM. During this era, IBM ventured into hitherto untouched domains and introduced a number of new products. In the year 1946, IBM released the first product to use electronic arithmetic circuits – the IBM 603 Electronic Multiplier. At this time, IBM also introduced the Chinese character typewriter. Another noteworthy event of the year was the hiring of the first black salesman, much before the passing of the Civil Rights Act. 1948 saw the launch of the first large scale digital calculating machine, called the Selective Sequence Electronic Calculator.

During the 1950s IBM ventured into space exploration and defence. IBM’s growth during the World War had been so quick that they were confronted by a potentially problematic situation. Military spend would surely fall at the end of the war. How would IBM cope with the loss of a dependable market? To counter this problem, IBM expanded across the globe in order to reach international markets. IBM has in its kitty the honour of unveiling the world’s first personal computer in 1988. In collaboration with Intel and Microsoft, IBM went on to manufacture personal computers for use by schools, homes and small businesses. IBM also made available the Local Area Network (LAN) in 1985, by courtesy of which computer users could exchange data and share resources with other PC’s over an interconnected LAN. Along with this IBM invented the basis of network computing and many applications for PCs. Thus came into existence the World Trade Corporation in 1949 to look after its global operations. Arthur K. ‘Dick’ Watson, assumed headship of the unit. By 1970, the WTC began to break even with the IBM parent company.

IBM’s CEO Thomas J. Watson, passed away in 1956, at the age of 82, leaving the helm of the company in the hands of his eldest son Thomas J. Watson, Jr.. Thomas Watson Jr. became the CEO of IBM in 1952. During this time the company was under considerable change and duress, due to the rapidly evolving technology of the time. Within a few years, new inventions like disk drives, magnetic storage, and electronic computers had been made available. The market was not steady and new competitors were mushrooming. It was in short a ‘make or break’ period and Watson and his executives were under tremendous stress.

Watson, Jr. countered the problem by a series of structural and organizational changes. He established a modern management hierarchy, which would enable him to manage more efficiently. He organized a number of unrecorded IBM practices into formal policies and procedures. Notable among these have been some such as IBM’s Open Door, Speak Up, and Three Basic Beliefs. He is also credited for the company’s first equal opportunity policy which was sanctioned in 1953, eleven years before the Civil Rights Act and a year before the result of the Brown versus Board of Education case which was being played out in the US Supreme Court.

Watson, Jr. noticed that IBM’s corporate design was not up to the mark. During the mid-1950s he brought on board Edward Noyes to redesign IBM’s corporate Design Program. Along with a group of popular designers, artists and architects Noyes helped design products, graphics, structures and more for the next twenty years. In 1954, another significant achievement took place in IBM, in the Poughkeepsie office of New York. Arthur L. Samuel, an employer of IBM pioneered into the field of artificial intelligence with a game of checkers which ran on IBM 704, and could learn from its own experience. It is likely to be the first ever self-learning program.

Watson, Jr. also collaborated with the government of the United States to develop a number of digital innovations. During the cold war the government realised the importance of digital advancements in computing , spawning a number of projects driven by the Department of Defence. The most important project during that period was the SAGE interceptor early detection air defense system. IBM began a collaboration with Lincoln Laboratories, MIT in 1952, to design an air defence computer. Although the two institutions had a number of disagreements, they were able to finalise the design in 1953. Shortly, IBM won the contract to produce two prototypes.

In 1954, IBM became the primary contractor for computer hardware, for the SAGE air defence system of the United Air Force. In order to begin working on such a large-scale communication system, IBM was granted the help of the Massachusetts Institute of Technology. The Institute provided them access to valuable research and the first real-time digital computer. IBM procured access to a number of pioneering advancements like real-time operating systems, magnetic core memory, integrated video display, light guns, analog and digital conversion methods, duplexing and digital data transmission, algebraic computer languages, multiprocessing and more. As part of the SAGE project IBM manufactured 56 computers, each costing 30 million USD each. It was one of IBM’s biggest project and involved about 20% of its workforce at its best. The project was in existence until 1984.

IBM’s gamut of products expanded widely under the leadership of Watson, Jr.. A new facility was established at San Jose, and the area soon came to be known as the Silicon Valley. IBM San Jose established a storage development laboratory which produced disk drives in 1952. Disk drives were then a revolutionary invention. New establishments mushroomed at Lexington, Kentucky; Rochester Minnesota; Kingston, New York and Greencastle, Indiana. He also formulated a policy stating that IBM would use solid-state circuitry in all machine developments, and no IBM devices would make primary use of tube circuits.

IBM reaped a number of benefits through its collaboration with the US Defence. Other than the revenue, IBM gained access with numerous avant-garde technological advancements, especially in the domain of digital computers. However IBM refused the opportunity of programming the new computers because they would need about 2000 new programmers, and they would not have been able to absorb them into the company after completion of the project. The job was eventually won by RAND computers. IBM however designed the SABRE airline reservation system as part of the SAGE project.

IBM’s government collaboration coupled with the launch of its popular products like the IBM 700 series, IBM 650 and the IBM 305 RAMAC, catapulted the company into success. IBM had become the world’s foremost technological company under Watson, Jr.’s leadership. Out of the 6000 computers in the US, 4000 had been produced by IBM.

The Thomas J. Watson Research Center was established in 1964, and it consists of the Poughkeepsie research headquarters, which was moved to Westchester County NY. The research centre continues to be IBM’s largest research centre, dealing with computer science, semi-conductors, mathematics and physical science. IBM also moved their corporate headquarters to Armonk in New York.

Louis V. Gerstner joined IBM and assumed its leadership as CEO in 1993. He had previously worked with companies like American Express, McKinsey and Co. and Nabisco. Under his leadership all independent companies under the IBM umbrella were merged to form a single company. He also began the company focus on integrated solutions. Today IBM is a company known for its proficiency in products, services, solutions and technology.