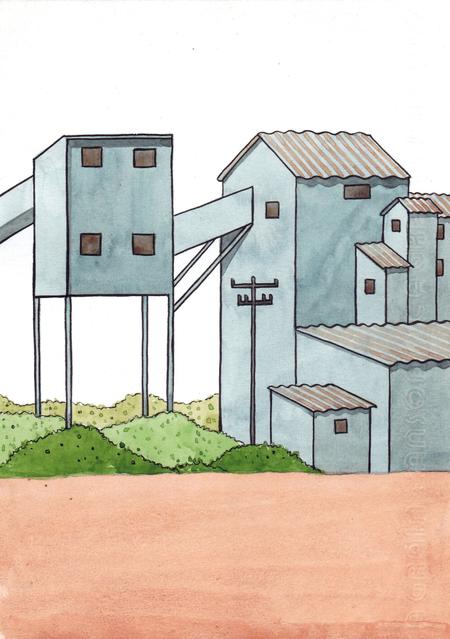 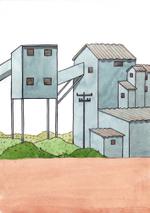 Franciscan Ware, a part of Gladding, McBean & Co. founded in 1875, manufactures a line of dinnerware called ‘Starburst’. When Gladding, McBean & Co. first started, it manufactured building products made of clay, like roof tiles, sewer pipes and bricks. The company set up its plant in Placer County, California because of the rich natural deposits of clay in the area. With a booming business, the company became the largest manufacturer of clay products in the Unites States by the mid-20s. (Source: Miller’s 20th-Century Ceramics).

Gladding, McBean & Co. expanded in 1934, and created Franciscan Ware, a pottery and tableware line. Most of the products in the new line were plain and solid-colored in the beginning. The line grew, however, to include hand-painted patterns like ‘Apple’, created in 1940, the very popular ‘Desert Rose’ in 1941, ‘Wildflower’ in 1942, and ‘Ivy’ in 1948. A line of Franciscan Fine China was launched in 1942 to join the pottery and tableware line.

Gladding, McBean & Co. developed a special mixing and firing technique which they kept working on. The growth and progress of the company in the industry was due to this clay formula which the company called ‘Malinite’. Their 1942 catalogue read - Both Franciscan Tableware and Catalina Art Pottery are made from the material called "Malinite," which was developed by the chemists of Gladding, McBean & Co., and which is covered by a number of U.S. and foreign patents. Most pottery is made of clay, but Franciscan Ware used Malinite, whose basic ingredient is rock – the material from which talcum powder is made. The talc is combined with an unformed, amorphous substance in the kiln, where the heat binds the molecules of the talc to form an exceedingly tough and long-lasting body. This body is highly unsusceptible to thermal shock and internal defects.

The most significant and distinctive feature of Malinite is that the coating or the glaze is coalesced in such a way with the body that the surface cannot crack or craze. Another feature is that the glaze is amenable to a vivid palette of colors and matchless matte textures. With Franciscan Ware, Gladding had devised a technique that made pottery long-lasting, solid and less porous so that the chances of its cracking were reduced significantly. The quality was better, and the products had intrinsic sale value. We now come to the creation of the Starburst design in the mid-1950s. After the war, with the economic situation improving, consumers were ready and eager for something new. Franciscan took advantage of this situation and introduced a new, starry design on Starburst. The futuristic design blended in very well with new chrome kitchens and modern appliances.

Starburst, introduced in 1954 was different from other patterns in that it was a smooth decal design, while the conventional designs were hand-painted, raised ones. Designed by George James, it was fixed on the ‘Eclipse’ shaped dish. Two other Franciscan designs of the 1950s, ‘Duet’ and ‘Oasis’ also have this unusual dish shape. According to Miller’s Collectibles, the Starburst pattern was produced only between 1954 and 1957. The accuracy of this statement, however, cannot be confirmed, because it is not easy to come upon information about the company in the 1950s. There is mention in other sources of the production of Starburst designs through the early part of the 1960s. Change of ownership and management in the early ‘60s could be the reason for the confusion, and the loss of information.

Gladding, McBean & Co. sold the Franciscan Company formed the International Pipe and Ceramics Corporation, popularly known as Interpace in 1968. Interspace brought together Franciscan shapes and other ceramic manufacturers that they had bought. In 1979, Franciscan was sold to Wedgewood. The production was moved to Eng land and the California plant shut down in 1984. Today, the few remaining Franciscan patterns are sold under the name Johnson Brothers.