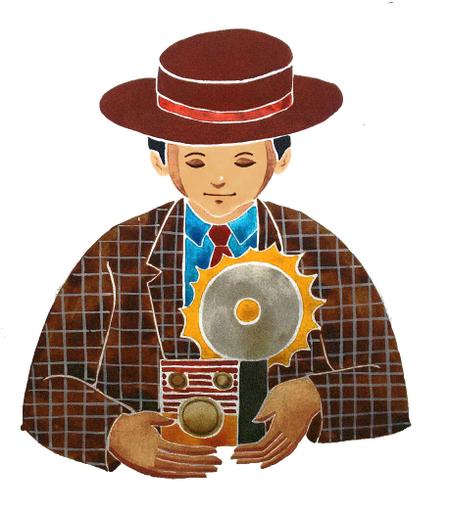 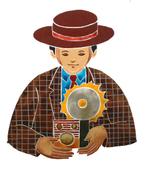 In the year 1880, George Eastman, the founder of Eastman Dry Plate and Film Company, invented single-shot pieces of paper covered in a photographic emulsion. Fellow photographic expert and inventor, William Walker joined Eastman’s Company in 1883 and along with Eastman, developed a roll-holder device for Eastman’s dry photo plates in 1885.

A transparent nitrocellulose film base was created in 1887 by Hannibal Goodwin, independently of Eastman. In 1888, Emile Reynaud came up with the idea of perforations on the nitrocellulose film. Then in 1889, Eastman put together the inventions of Goodwin and Reynaud and created the first mass-produced rolls of transparent photographic film.

Working with Eastman in 1892, Edison trimmed Eastman’s 40mm filmstock to 35mm, with four sprocket-hole perforations per frame. He obtained a patent for this perforated film, but the patent was later invalidated by court in a legal proceeding. He then created the ‘Kinetoscope’, a motion picture device which could be viewed by one individual at a time. With the 35mm film and the Kinetoscope, Eastman and Edison went on to create the movie industry.

“A Trademark should be short”, said George Eastman. It should be “vigorous”, and “incapable of being misspelled to an extent that will destroy its identity.” And it “must mean nothing.” With these specifications in mind, Eastman created the word Kodak and obtained a trademark in 1888. Eastman came up with the word Kodak, because, in his own words, “The letter K had been a favorite with me – it seemed a strong, incisive sort of letter.”

With the idea that the name should start and end with the letter K, Eastman tried a great number of combinations until he arrived at the word Kodak. The name Kodak went on to become one of the most recognizable brands in the world. Kodak was, originally, just the brand name of Eastman’s cameras. Owing to the immense popularity that the brand gained, the name of the company itself was eventually changed to Eastman Kodak.

Eastman launched the first Kodak Camera in 1888. The camera came with a pre-loaded roll of paper film that could take 100 photos. The camera had to be sent back to Eastman to get the roll developed and re-loaded with new film. This camera practically led to the advent of the concept of amateur photography.

Kodak cameras were sold with the advertising slogan ‘You Press the Button, We Do the Rest’. The Kodak ‘Box’ cameras were soon replaced by folding/collapsible cameras with nitrocellulose film, making them easier to carry around. By 1897, a folding, compact, pocket camera was invented.

In 1900, a cardboard-box camera called the ‘Brownie’ was released by Eastman. This camera cost $1, and was easy to use. It was the first camera to instantly become a mass success. It was affordable and easy to operate, and gave birth to the concept of a ‘snapshot’.

Over the next 30 years or so, Kodak produced a series of cameras which were well received in the market and made photography so easy that almost everyone was a photographer. The company raked in huge profits, and,wisely, invested a substantial part in research and development. This investment in research led to the development of Kodachrome in 1935. Kodachrome was the first successful mass-market color film. It came in almost all formats – 8mm, 16mm and 35mm, 120, 116, 828. This film made color movies and rich color photos in print possible.

Kodachrome was produced and sold all over the world for about 74 years, until the digital age pushed it to its end. Kodachrome was used by photographer Steve McCurry to capture the photo ‘The Afghan Girl’. This photo made it to the front cover of the National Geographic magazine in June 1985, and is generally considered the most famous photo taken using the Kodachrome.

With the successful and highly profitable color film dominating the market, Kodak diversified and entered the field of X-ray imaging, CT, and MRI. It created films that could detect the amount of radiation the Project Manhattan scientists were being exposed to. Kodak’s microfilm technology was used during World War II to compress and shrink ‘V-mail’. In one instance, it enabled the UK military to reduce 37 bags of V-mail to just one. A substantial portion of Kodak’s earnings came from the developing of its films. It used advanced printing processes that turned out high-quality, color-separated printing in the ‘50s and ‘60s.

The first ever X-ray (radiograph) was captured on Kodak film. By the end of the 1960s, Kodak well and truly owned the photography industry. It had sales exceeding $4 billion, which is around $50 billion today, and a workforce of 100,000 employees. It provided the film for John Glenn’s orbit of the Earth in 1962, and also for the Lunar Orbiter Program in 1966. Kodak also has the distinction of making the camera that was used by the astronauts of Apollo 11 on the surface of the Moon.

Pioneering work in Digital Imaging
In today’s digital world, with big players like Samsung, iPhone, Canon, Nikon and Sony Digital Cameras, it has almost been forgotten that Kodak was a pioneer in digital imaging. Steven Sasson, an engineer at Eastman Kodak, made the first ever Charge-Coupled Device (CCD) image sensor. It had a resolution of 0.1 or 10,000 pixel. The world’s first camera-size megapixel sensor was developed by Kodak in 1986. Kodak also created the world’s first digital SLR camera in 1991, which was a modified Nikon F3 with a 1.3 megapixel CCD sensor.
The ‘90s, however, were the years in which Kodak started to struggle against high-tech Japanese manufacturing mastery. Canon, Sony and Fuji began to supplant Kodak. Kodak invested in research, constantly innovated, and had a large patent portfolio; despite this, it never really succeeded in the digital photography arena. This is most likely the reason why Kodak is now on its last legs.

In what could be termed a testament to Kodak’s rich research history, it was a Kodak researcher who created the first efficient organic light emitting diodes (OLED). After 20 more years of continued research, Kodak, together with Sanyo, produced the first OLED display in 1999. It used the OLED technology and produced beautiful digital photo frames till the mid-2000s. This innovation, however, did not gain traction. Poor marketing strategy, an unready market, and high prices were the reasons why it was never a huge commercial success.Kodak sold all its OLED-related assets to LG in 2009.

The Bayer filter, which describes the arrangement of color dyes on a piece of photographic film, was created by Eastman Kodak researcher Bryce Bayer in 1976. The filter is a square grid with a pattern of 50% green, 25% red and 25% blue colors. This filter is now used in digital photography, with almost every digital sensor using an RGGB Bayer filter to capture images.

Kodak launched solid, strong products in the digital sphere, but made the mistake of not moving fast enough to ward off competition from its Japanese rivals. Although Kodak developed the first SLR, it focussed mainly on its highly successful and profitable analog film business. When Kodak finally realized that film was likely to be a thing of the past and the world was going digital, it decided to make the leap. By then, however, the likes of Sony and Canon were years ahead, and were masters of the field.

Kodak’s user-friendly EasyShare cameras and printers have enjoyed moderate success and substantial critical acclaim. But, with the analog industry all but dead, it hasn’t been enough. Kodak is now on its last legs as it tries to find a way out of the morass. Kodak has tried to stem the rot by aggressively litigating against the likes of Apple and BlackBerry over patents; it has come up with interesting and unconventional gadgets at CES, but none of these measures have worked. In the last few years, almost no new exciting products have been launched, and Eastman Kodak has been de-listed from Dow Jones and S&P 500 indexes. It has also been steadily losing staff and assets.

Kodak’s future is uncertain. But whether it goes on or gives up and comes apart, nobody can deny that the company created by George Eastman has had a profound impact on almost all aspects of popular culture as we know it today. From the movies to the glossy magazine, from the pioneering work in digital photography to the creation and elevation of celebrities by capturing them in a photo, Kodak has played an important part, and for that, we must be grateful.