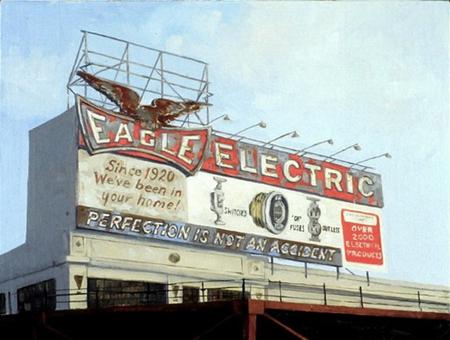 Eagle Electric Manufacturing Company was founded by the brothers Louis Ludwig and Philip Ludwig in 1920 in Long island City, New York. It was a maker of switches, circuit units, and electrical devices. On the death of the founders, their children ran the company successfully. In the spring of 2000, Cooper Industries purchased Eagle Electric, and formed the Cooper Wiring Devices, Inc., which operates in Peachtree City, Georgia.

The Queensboro Bridge had a giant neon billboard overlooking it, with the words ‘Eagle Electric – Perfection is not an accident’ written in capitals. This slogan had been coined by the founder Louis Ludwig. The company began updating the advertising slogan and logo graphics in 1987. When the company was purchased by Cooper, the manufacturing activities were moved into different parts of the world. By 2006, all of the manufacturing had been moved out of Long Island City to China, Mexico and the south-eastern states of America.

By the early 1980s, Eagle was selling wiring device SKUs in the thousands to hardware stores across the country. Eagle was always ahead of its time, and in 1991, introduced a line of surge protector wiring devices under the name eSmart. This trademark was the first to have an ‘e’ before the name. With no competition in the surge protector industry, eSmart sold well to the big box stores. But the production of this brand was stopped after some years by the then Marketing Director Jim Cook who thought that computers were a ‘passing fad’ and the market for surge protectors would soon diminish.

In the early 1980s, the company began to move its production facilities out of New York, and into Greensboro, North Carolina. Later, some facilities were also moved to Mexico. Most of the production was maintained in Queens, New York until the company was sold to Cooper. The company announced in 1997 that the new labor contract and tax abatements had made them decide to keep the company’s operations in New York. Only a year later, the board of directors removed the company president and some other executives.

Eagle Electric Manufacturing Company was founded in 1920. It was a maker of electric devices, switches and circuit units, based in Long Island City, New York. A giant billboard with Eagle’s advertising slogan overlooked the Queensboro Bridge. The illuminated billboard was the result of a great combination of the efforts of sheet-metal workers, light-designers, and sign painters. The words ‘PERFECTION IS NOT AN ACCIDENT’ were written on the billboard in neon. Three of the more than 2000 electric products manufactured by Eagle in the many buildings between 21st street and Jackson Avenue were artfully placed above this slogan.

A resident of New York remarks that not all the letters in the slogan would always be functioning. The slogan sometimes read PERF____ON IS NOT AN ACC_____, or ____ECTION IS ___ __ACCID___, or some other variation. She says that some nights when all the neon lights would be working, the billboard, featuring a noble-looking eagle with its beak in profile and flared wings and the famous slogan, was a fantastic sight.

Increase in automobile ownership and commuter rail transit resulted in an expansion of billboard advertising in the late 1920s. Eagle Electric started sharing space along the elevated tracks with other local manufacturers like the Swingline Staple Factory a few stops east, which displayed a huge neon stapler for ‘Swinging Easy Loading Staples’. The Adams/Chiclets Chewing Gum factory near the Long island Rail Road had a banner-size lettering floating above the roofline of its graceful art deco building. Today, along with the famous Pepsi Cola sign, the only remaining example of grand signs in the Hunters Point area is Silvercup Studios, which was once a baker of bread. The Eagle Electric sign went dark in September 2000.

The billboard advertisements of the Eagle era with the hand painted signs have disappeared. The products and the target market of these products have also changed. The hand painted, well-crafted and vibrant signs of those years reflected the pride of the locals where the industry was situated. People were proud that solid, useful products were manufactured in their neighborhood, and the local community made up of working middle class people purchased these products. Printed vinyl or printed paper is most frequently used in outdoor advertising today, and the focus is mostly on luxury goods and services, or emerging ‘brands’ mostly made abroad.