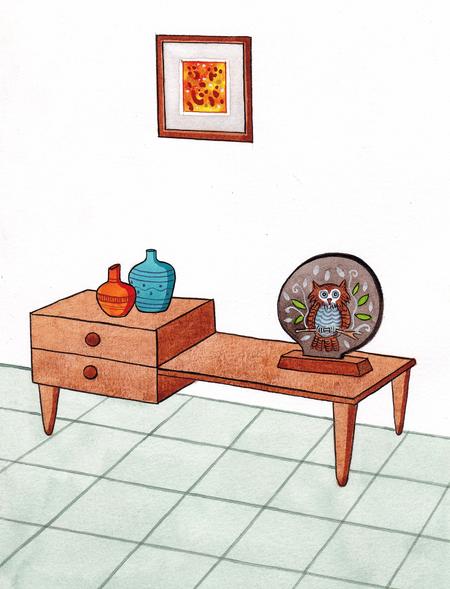 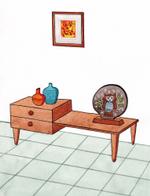 Guthrie Courvoisier, along with his wife Moira Wallace, had started the renowned household articles company Couroc in Monterey, California in 1948. The firm had been into designing, manufacturing, and selling a variety of articles of everyday use such as trays, platters, cases, ashtrays etc., until its closure in the 1990s. Couroc, which was much acclaimed for its orientation towards aesthetics and originality, was quite pricey, and therefore catered mainly to the affluent clientele in upscale stores.

Most of their articles were designed in such a way as to be in tune with the American pop culture of the times, and had rather quirky themes. The credit for this rests on Guthrie’s designer wife Moira Wallace and a team of talented artists, who aided Couroc in scaling the heights of success and becoming one of the much-loved brands in a short span of time. At its peak, Couroc’s products, which were mostly made of resin and glass, were considered a style statement. Even now, its products are of high interest to collectors due to their fine quality and aesthetic value.

Guthrie Courvoisier had always been associated with art; in fact in his early years, he had started the Courvoisier Galleries, and collaborated with Walt Disney and brought out Disney character paintings by artists on animation cels, which was the first such art to be sold that way. This venture went on to become a historic success, with some of the early works continuing to be in huge demand even now. Afterwards, during the World War II, Guthrie had worked extensively with plastics, thereby, gaining precious knowledge about it, which would go on to be very useful in his later life.

After the war, when Guthrie and his wife, Moira, wanted to start a business, they chose the household articles sector, with a view to tap the potential in the household articles market, where they felt that the artistic options weren't largely available to the public. They started their company and named it Couroc; a play on the words ‘Cour’voisier and ‘Roc’k. The couple fiddled and experimented to zero-in on the process and materials to be used to make the articles. In its initial stages, they used a semitransparent, brittle, hefty material to make articles like dishes and trays. But later, due to Guthrie’s technical know-how in plastics and his wife’s expertise, they managed to create a patented material called phenolic resin that was hard, non-reactive to fire and alcohol. This resin was the foundation for many of the company’s products.

Couroc’s speciality in its early years lay in the intricate motifs on their products which were often very unique; this was because Guthrie Courvoisier and his wife Moira only employed expert artists, found aplenty in Monterey where the art scene was quite happening, to create the beautiful designs. The designers were given the creative liberty to do what they believed in. They would often bring in ordinary items found in stationary or equipment stores and meld them into the elegant designs, often making one of a kind pieces of work, which were sometimes marked by their designers.

The articles weren't just created randomly, they were often very topical; some of the themes include nature, world affairs, atomic era, architecture, etc.. The ocean, in particular, impressed their work a lot; as Monterey, where Couroc was based, was a Pacific coast town, so a chunk of some of their best designs included seashells, corals, etc.. Couroc’s other bestselling ranges were based on a variety of inspirations including mosaics found during Pompeii excavations, Egyptian designs, Tiki, flora, fauna, etc..

Apart from their main work, they also collaborated with a number of prestigious universities, elite stores, hotels, etc., to bring out personalised articles for them. Even after Guthrie’s death in the 1970s, the company continued to be moderately successful. However, the originality of the earlier years went missing and their articles began becoming generalised. Though the ownership of the Couroc passed a few hands including RC Cola, it went on bringing out its articles, before finally closing its operations down sometime in the 1990s.